The ceiling is holding fast. The market pared its losses from earlier in the day, with the S&P 500 (INDEXSP:.INX) and the narrower, price-weighted Dow Jones Industrial Average (INDEXDJX:.DJI) finishing down 0.1% and 0.2%, respectively. For the S&P 500, this is the 12th time this month the index has closed within 1% of its October 2007 high, and that number appears to defy chance.

Consistent with stocks’ decline, option traders pushed the VIX , Wall Street’s “fear index,” up 3% to close above 13. (The VIX is calculated from S&P 500 option prices and reflects investor expectations for stock market volatility over the coming 30 days.) 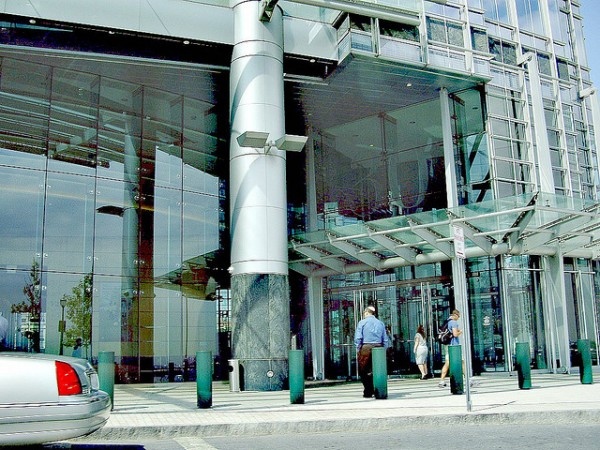 The bottom line on Buffett’s new deal terms
In this morning’s column, I mentioned that Berkshire Hathaway Inc. (NYSE:BRK.B) CEO Warren Buffett had renegotiated the terms of his warrants on shares of investment bank Goldman Sachs Group, Inc. (NYSE:GS) and highlighted the 50-year relationship between Buffett and Goldman. Here, I’d like to focus on the new terms and why current or prospective Goldman shareholders should be paying attention.

The warrants Goldman initially granted to Berkshire Hathaway Inc. (NYSE:BRK.B) gave Buffett the right to purchase 43.5 million shares of its shares at a strike price of $115, which would require a $5 billion cash payment and hand Berkshire roughly a 9% stake. Instead, Buffett will receive a share award roughly equivalent in value to the immediate capital gains on 43.5 million shares bought at $115 (strictly speaking, it will equal the difference in value between the average closing price on the 10 days before Oct. 1 and $115, multiplied by $43.5 million.)

Crucially, the new terms require no cash disbursement by Buffett — it’s pure manna from Goldman Sachs Group, Inc. (NYSE:GS). Conversely, Berkshire Hathaway Inc. (NYSE:BRK.B) is left with a much smaller stake in the bank — around 2%, based on Monday’s closing price. In announcing the new terms, Buffett said:

“We intend to hold a significant investment in Goldman Sachs, a firm that I did my first transaction with more than 50 years ago. I have been privileged to have known and admired Goldman’s executive leadership team since my first meeting with Sidney Weinberg in 1940.”

That sounds like high praise, but it’s actually a bit of folksy misdirection. Buffett has twice in his annual letters referred to Mae West’s quote saying that “Too much of a good thing can be wonderful.” Assuming he expects Goldman shares to produce a good return, if a 2% stake is a good thing, surely 9% would be wonderful.

If Buffett prefers not to put up $5 billion to buy Goldman Sachs Group, Inc. (NYSE:GS) shares at $115 per share, he is implicitly signalling that believes he will find better uses for that capital. If one considers that the $115 cost basis he is passing up represents better than a 20% discount to today’s closing price, current investors may want to revisit their return assumptions.

The article What Buffett Didn’t Say About Goldman originally appeared on Fool.com.

Fool contributor Alex Dumortier, CFA has no position in any stocks mentioned; you can follow him on LinkedIn. The Motley Fool recommends Berkshire Hathaway and Goldman Sachs and owns shares of Berkshire Hathaway.