The stock market is a wonderful thing, but only if it’s used wisely.

The typical way to articulate the proper use of the market is to distinguish between investing and speculating; the former is advised while the latter should be avoided.

But the problem is that the line between these activities is often blurred. What may be considered investing by one person may appear speculative to another.

With this in mind, I’ve found it helpful to look at the market in a different way, broken down into a general rule and a handful of exceptions.

As a general rule, it’s best to assume that you can’t beat the market by picking individual stocks. The data to support this position is far from conclusive, but what we do have suggests that the S&P 500 outperforms the individual investor by a factor of roughly two over the long run.

Consequently, the vast majority of retail investors would have both more time and more money by simply purchasing shares in an exchange-traded fund that tracks the index. The two that come to mind most readily are the SPDR S&P 500 ETF Trust (NYSEARCA:SPY) and its slightly higher-yielding brethren at the SPDR S&P Dividend (ETF) (NYSEARCA:SDY).

Many investors may perceive a strategy of investing exclusively in funds like these as capitulation — an admission, that is, that they don’t have the gravitas to take on the market and win. The best that can be said about this philosophy is that the market isn’t a forum in which to test machismo; its function is to make you money.

Beyond the general rule, there are three exceptions.

The first exception is for people who have inside information. As we’ve learned with the giant hedge fund SAC Capital, it’s quite possible to beat the market if you’re trading on information that isn’t known to the public. But as we’ve also learned from this experience, the people using it could very well end up in jail.

The second exception is if you have a legal “edge at stock-picking.” My colleague Morgan Housel went into detail about this topic here, and I encourage you to read it.

The important thing to note is that few retail investors have such an edge. The type of individual who does is typically a professional investor with superior analytical skills and the ability to control his or her emotions through the market’s inevitable cycles.

A perfect example is Warren Buffett, the chairman and CEO of Berkshire Hathaway Inc. (NYSE:BRK.B) — click here to discover the 10 things that make Buffett so successful.

Since the late 1960s, Buffett has used the profits and float from Berkshire Hathaway Inc. (NYSE:BRK.B)’s various and growing units to reinvest opportunistically, and in doing so he’s dramatically outperformed the broader market. You can see this in the following chart, which plots the long-run performance of Berkshire’s stock versus the S&P 500. 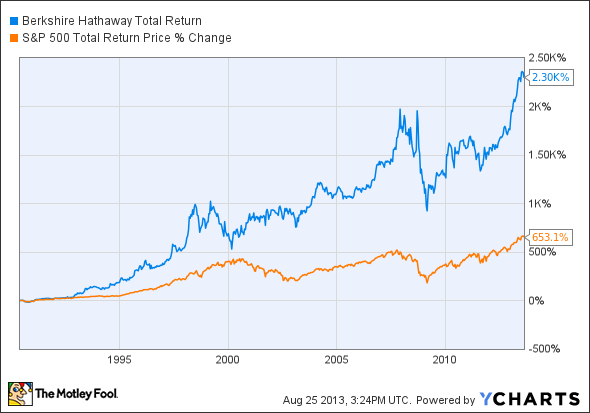 Another example hits much closer to home to both the author and readers of this article. As The Wall Street Journal recently announced, “The three top spots in the Hulbert Financial Digest‘s five-year rankings through June 30 of more than 200 investment-advisory services … are subscription newsletters published by the same advisory firm, the Motley Fool.”