As highly as we Fools think of Warren Buffett and Berkshire Hathaway Inc. (NYSE:BRK.B), we’d be foolish (with a lower-case “f”) to believe any company is truly without risk.

1. Losing to the market on Buffett’s terms
Over the years, Buffett has largely made his name by identifying stocks whose share prices have lagged the intrinsic value of their underlying businesses. As a result, it should come as no surprise that Buffett believes the best way to measure Berkshire Hathaway Inc. (NYSE:BRK.B)’s performance is by calculating its book value.

Sure enough, as I noted last month, Buffett himself lamented Berkshire Hathaway Inc. (NYSE:BRK.B)’s respectable 2012 book value growth of 14.4% as “subpar” after it fell short of the S&P 500’s 16% gain.

What’s more, while Buffett has helped Berkshire Hathaway Inc. (NYSE:BRK.B)’s book value per share rise an astounding 586,817% over the past 48 years (seriously — that’s no typo!), he readily admits that, with Berkshire’s enormous capital base, its book value per share going forward will probably have a hard time increasing “at a rate even close to its past rate.”

2. Losing to the market on Mr. Market’s terms
Even if Berkshire’s book value per share manages to outpace the broader market’s return, you can bet that if the share price lags, many fickle investors still won’t be patient enough to wait for the price to catch up with the value of the business.

Of course, that is part of why it’s so hard to be a value investor, but the fact remains that there will be more years during which Berkshire Hathaway stock will lag the market. For example, look at how much faster Berkshire’s book value has increased relative to both its share price and the S&P 500 over the past five years: 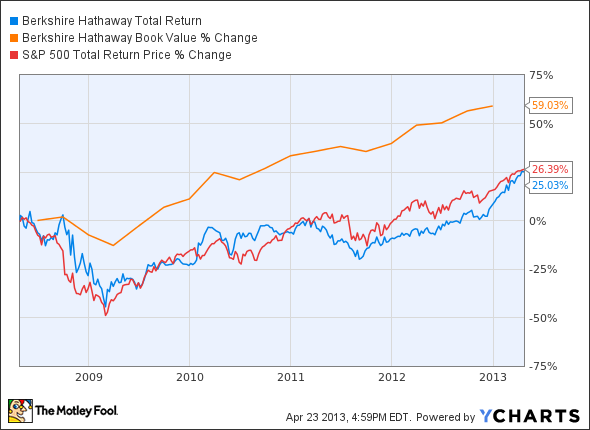 While this isn’t necessarily Berkshire’s fault, you can bet many investors will inevitably perceive it as a failure.

3. Failure to maintain superior management
As Peter Lynch once said, “Go for a business that any idiot can run — because sooner or later, any idiot probably is going to run it.”

Before you go yelling “Blasphemy!” from the rooftops, I’m all too aware that Berkshire’s current management team is as solid as they come. Heck, there are at least six people with whom I wouldn’t be surprised should they be chosen as Buffett’s eventual successor.

The Procter & Gamble Company (PG), And How to Assess A Declining Level...
Monthly Newsletter Strategy
Download a free copy of our newsletter and see the details inside!
Hedge Fund Resource Center
Billionaire Hedge Funds