At Insider Monkey, we pore over the filings of more than 700 top investment firms every quarter, a process we have now completed for the latest reporting period. The data we’ve gathered as a result gives us access to a wealth of collective knowledge based on these firms’ portfolio holdings as of September 30. In this article, we will use that wealth of knowledge to determine whether or not Benefitfocus Inc (NASDAQ:BNFT) makes for a good investment right now.

Benefitfocus Inc (NASDAQ:BNFT) has experienced an increase in hedge fund interest of late. Our calculations also showed that bnft isn’t among the 30 most popular stocks among hedge funds.

How have hedgies been trading Benefitfocus Inc (NASDAQ:BNFT)? 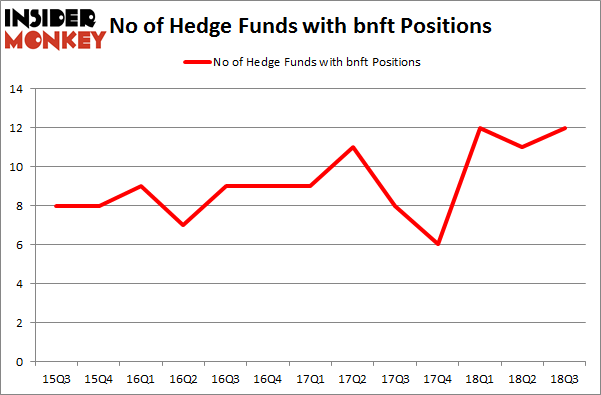 Of the funds tracked by Insider Monkey, Millennium Management, managed by Israel Englander, holds the number one position in Benefitfocus Inc (NASDAQ:BNFT). Millennium Management has a $33.3 million position in the stock, comprising less than 0.1%% of its 13F portfolio. The second most bullish fund manager is Polar Capital, managed by Brian Ashford-Russell and Tim Woolley, which holds a $11.5 million position; the fund has 0.1% of its 13F portfolio invested in the stock. Other professional money managers that are bullish comprise Steve Cohen’s Point72 Asset Management, Chuck Royce’s Royce & Associates and D. E. Shaw’s D E Shaw.

As aggregate interest increased, some big names have been driving this bullishness. Polar Capital, managed by Brian Ashford-Russell and Tim Woolley, assembled the largest position in Benefitfocus Inc (NASDAQ:BNFT). Polar Capital had $11.5 million invested in the company at the end of the quarter. Steve Cohen’s Point72 Asset Management also made a $6.7 million investment in the stock during the quarter. The other funds with new positions in the stock are Brandon Haley’s Holocene Advisors, Ken Griffin’s Citadel Investment Group, and Matthew Hulsizer’s PEAK6 Capital Management.

As you can see these stocks had an average of 13.25 hedge funds with bullish positions and the average amount invested in these stocks was $57 million. That figure was $69 million in BNFT’s case. FTS International, Inc. (NYSE:FTSI) is the most popular stock in this table. On the other hand Cryolife Inc (NYSE:CRY) is the least popular one with only 8 bullish hedge fund positions. Benefitfocus Inc (NASDAQ:BNFT) is not the least popular stock in this group but hedge fund interest is still below average. This is a slightly negative signal and we’d rather spend our time researching stocks that hedge funds are piling on. In this regard FTSI might be a better candidate to consider a long position.