Is BBX Capital Corporation (BBX) Losing A Bit of Steam?

At Insider Monkey, we pore over the filings of more than 700 top investment firms every quarter, a process we have now completed for the latest reporting period. The data we’ve gathered as a result gives us access to a wealth of collective knowledge based on these firms’ portfolio holdings as of September 30. In this article, we will use that wealth of knowledge to determine whether or not BBX Capital Corporation (NYSE:BBX) makes for a good investment right now.

BBX Capital Corporation (NYSE:BBX) was in 15 hedge funds’ portfolios at the end of the third quarter of 2018. BBX investors should pay attention to an increase in enthusiasm from smart money of late. There were 14 hedge funds in our database with BBX holdings at the end of the previous quarter. Our calculations also showed that BBX isn’t among the 30 most popular stocks among hedge funds.

While collecting data on the company, we came across Avenir Capital’s letter for the December 2017 quarter. The stock was the best contributor for the investment manager’s Avenir Global Fund. Here is what the letter said regarding the stock:

“For the full year, our biggest winner was BBX Capital (BBX: NYSE) which increased 63% to $7.97 on the back of the partial IPO of its main operating business, Bluegreen (BXG: NYSE). BBX has been a wonderful investment for Avenir generating nice profits as the share price increased 140% over our average entry price. The strong share price performance, however, has only partially closed the gap to underlying value as the company’s operating performance has materially increased its underlying value over the time we have owned it. If the market gave full credit for BBX’s 90% ownership of the now publicly listed BXG, at BXG’s year-end price of $18.26, BBX Capital would be worth over $12 per share or a 50% increase from the year-end price. Bluegreen is also trading cheaply compared to its major peers leading to still further upside should it trade more in line with peers.” 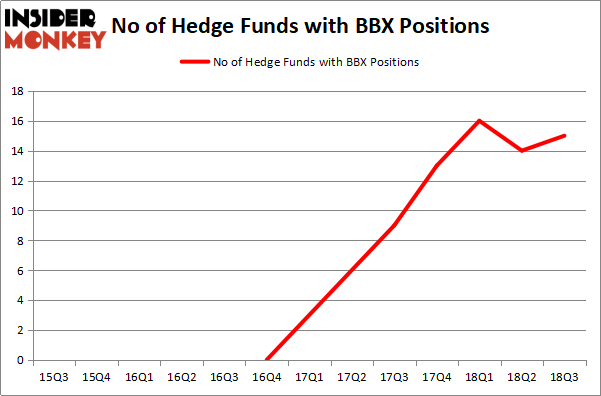 Among these funds, Angelo Gordon & Co held the most valuable stake in BBX Capital Corporation (NYSE:BBX), which was worth $21.5 million at the end of the third quarter. On the second spot was Fondren Management which amassed $10.6 million worth of shares. Moreover, Renaissance Technologies, Alta Fundamental Advisers, and Scoggin were also bullish on BBX Capital Corporation (NYSE:BBX), allocating a large percentage of their portfolios to this stock.

As you can see these stocks had an average of 11 hedge funds with bullish positions and the average amount invested in these stocks was $102 million. That figure was $65 million in BBX’s case. Churchill Capital Corp. (NYSE:CCC) is the most popular stock in this table. On the other hand 0 is the least popular one with only 1 bullish hedge fund positions. BBX Capital Corporation (NYSE:BBX) is not the most popular stock in this group but hedge fund interest is still above average. This is a slightly positive signal but we’d rather spend our time researching stocks that hedge funds are piling on. In this regard CCC might be a better candidate to consider a long position.