BB&T Corporation (BBT): Are Hedge Funds Right About This Stock?

A whopping number of 13F filings filed with U.S. Securities and Exchange Commission has been processed by Insider Monkey so that individual investors can look at the overall hedge fund sentiment towards the stocks included in their watchlists. These freshly-submitted public filings disclose money managers’ equity positions as of the end of the three-month period that ended September 30, so let’s proceed with the discussion of the hedge fund sentiment on BB&T Corporation (NYSE:BBT).

BB&T Corporation (NYSE:BBT) has experienced a decrease in enthusiasm from smart money in recent months. BBT was in 20 hedge funds’ portfolios at the end of the third quarter of 2018. There were 21 hedge funds in our database with BBT positions at the end of the previous quarter. Our calculations also showed that BBT isn’t among the 30 most popular stocks among hedge funds.

What does the smart money think about BB&T Corporation (NYSE:BBT)?

Heading into the fourth quarter of 2018, a total of 20 of the hedge funds tracked by Insider Monkey held long positions in this stock, a change of -5% from the previous quarter. The graph below displays the number of hedge funds with bullish position in BBT over the last 13 quarters. So, let’s review which hedge funds were among the top holders of the stock and which hedge funds were making big moves. 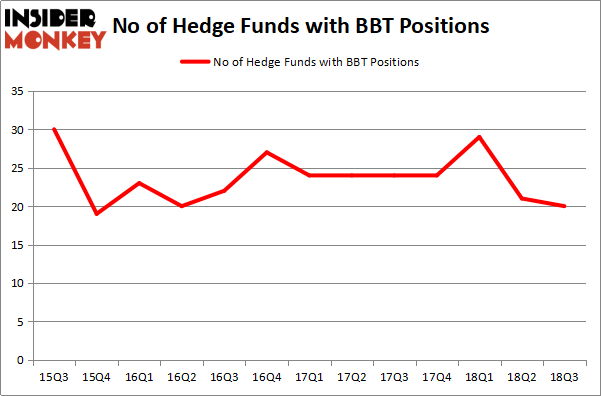 Among these funds, Citadel Investment Group held the most valuable stake in BB&T Corporation (NYSE:BBT), which was worth $24.1 million at the end of the third quarter. On the second spot was Gillson Capital which amassed $22.6 million worth of shares. Moreover, Two Sigma Advisors, Adage Capital Management, and AQR Capital Management were also bullish on BB&T Corporation (NYSE:BBT), allocating a large percentage of their portfolios to this stock.

Seeing as BB&T Corporation (NYSE:BBT) has experienced a decline in interest from the smart money, it’s easy to see that there were a few fund managers who were dropping their full holdings heading into Q3. It’s worth mentioning that Breogan Vazquez’s Breogan Capital cut the biggest stake of the 700 funds monitored by Insider Monkey, totaling an estimated $4.8 million in stock, and Nick Thakore’s Diametric Capital was right behind this move, as the fund cut about $1.5 million worth. These bearish behaviors are important to note, as aggregate hedge fund interest dropped by 1 funds heading into Q3.

As you can see these stocks had an average of 31.75 hedge funds with bullish positions and the average amount invested in these stocks was $1.51 billion. That figure was $118 million in BBT’s case. Eaton Corporation plc (NYSE:ETN) is the most popular stock in this table. On the other hand Baker Hughes, a GE company (NYSE:BHGE) is the least popular one with only 27 bullish hedge fund positions. Compared to these stocks BB&T Corporation (NYSE:BBT) is even less popular than BHGE. Considering that hedge funds aren’t fond of this stock in relation to other companies analyzed in this article, it may be a good idea to analyze it in detail and understand why the smart money isn’t behind this stock. This isn’t necessarily bad news. Although it is possible that hedge funds may think the stock is overpriced and view the stock as a short candidate, they may not be very familiar with the bullish thesis. In either case more research is warranted.