There is plenty of good news to support the 30% move made by Baxter International Inc. (NYSE:BAX) shares in the past year. The company’s dividend has risen 44% in that time frame. Sales, earnings, and cash flow notched record highs in 2012, which enabled the company to make $1.2 billion in capital investments and spend $2.3 billion on dividends and share repurchases. Last year also marked at least five straight years of growing dividend payments and revenue. Not too bad.

Most of the success can be attributed to management’s focus on optimizing operations, which include dropping its generic injectables business, shoring up pension obligations, and consolidating departments. It seems to be paying off; but can Baxter International Inc. (NYSE:BAX)’s two business segments — BioScience and Medical Products — keep shares on an upward path?

A costly recall of Colleague infusion pumps that forced the company to take a $588 million charge to net income in 2010 — and tens of millions more in other years — is now finally behind it. It isn’t alone. Johnson & Johnson (NYSE:JNJ) and Stryker Corporation (NYSE:SYK) both suffered setbacks with hip implants in recent years, although few companies have a recall history that rivals Johnson & Johnson (NYSE:JNJ).

While they are hardly the only companies facing problems with medical devices, I believe all three present favorable risk-reward ratios for investors. Stryker Corporation (NYSE:SYK) has been a pretty reliable growth stock for long-term investors over the years. Despite some recent rough patches, the company has grown revenue from $6.72 billion in 2009 to $8.66 billion in 2012. Income has been the only sore spot for investors, which has greatly lagged the growth in sales. Perhaps that is the reason shares are barely keeping up with the S&P 500. 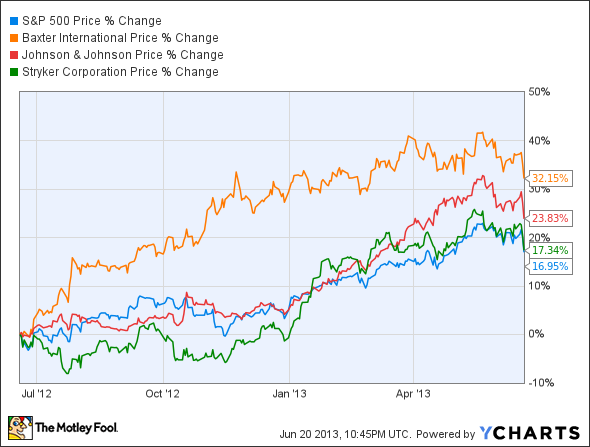 Luckily for Baxter International Inc. (NYSE:BAX) and Johnson & Johnson (NYSE:JNJ), each has the luxury of a pharmaceutical business to make it through choppy seas in the medical device industry. The latter has an impressive array of next-generation biologics on the market for various indications. Remicade, Stelara, and Simponi raked in $7.7 billion for the company in 2012 — 17% more than 2011 sales. Procrit, which encourages red blood cell creation, brought in $1.4 billion despite slowing sales. Can Baxter International Inc. (NYSE:BAX) achieve similar success?

BioScience
Medical Products is important to the top and bottom line, but BioScience is what I believe will fuel future growth for shareholders. That is a relatively easy prediction to make, especially given that Baxter International Inc. (NYSE:BAX) had six products approved by global regulatory agencies in 2012. Among them was Gammagard Liquid that, despite failing a phase 3 Alzheimer’s trial in May, became the first immunoglobin treatment approved for multifocal motor neuropathy in the United States.