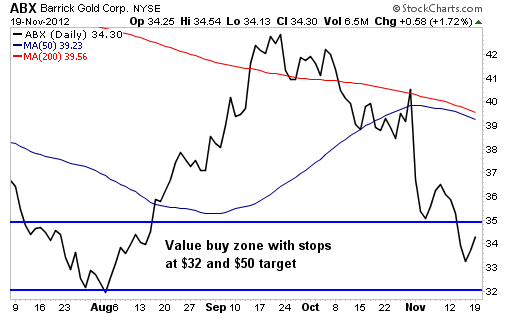 Earlier this month, The Wall Street Journal reported that Warren Buffett’s BNSF Railway will initiate a pilot program to investigate the viability of using natural gas to power its locomotives. If the program is successful, it would have wide ramifications, as the company is believed to be one of the largest consumers of diesel fuel in the country, second only to the U.S. Navy. The path from the shale gas boom to improved economic conditions, curtailed oil prices, and a stronger U.S. dollar isn’t a simple one, but it does follow a fairly straight series of connections. The ultimate result of this daisy chain of causes and effects is that gold prices are under legitimate pressure for the first time in many years.

The pilot program
While outfitting a locomotive to run on liquefied natural gas, or LNG, is not a simple procedure, it has the potential to result in significant cost savings. The price of a single locomotive that currently sits at roughly $2 million could rise by as much as $1 million for early conversations — economies of scale would presumably lower costs over time. The company didn’t fully disclose how much it would cost to retrofit its 6,900 existing engines.

Against this increase, where a single gallon of diesel went for an average of $3.97 last year, the comparable amount of LNG cost less than $0.50. Given the amount of fuel a locomotive burns, the additional cost would quickly be realized in savings from lower-cost operation. This number doesn’t include the necessary cost of cooling the LNG, but the savings are still expected to be significant.

The path from LNG to lower gold prices
Let’s start by accepting that the path I am about to describe is necessarily simplified, but it should serve as a good primer to understanding the larger issues. To begin with, as a result of exploding natural gas and shale oil reserves, the U.S. is importing significantly less oil. The Department of Energy has seen the country come off a peak of 60% of net oil imports to an expected 32% next year, and on a smaller number. That not only improves the trade deficit, but it also improves the current account deficit. This figure, which is measured in terms of a percentage of GDP, is expected to fall from nearly 3.6% of GDP down to 1.2% of GDP by 2020.

What all of these pressures mean is that globally, oil prices stabilize and U.S. costs fall. For example, in 2008, it’s estimated that we spent $216 billion on natural gas. BofA Merrill Lynch estimates that for 2012, that number had fallen to $76 billion, somewhat driven by the fact that high supplies of natural gas mean that the wholesale price in the U.S. is roughly one-third of what it is in both Europe and Asia.

From low energy prices come Chairman Ben Bernanke’s bailout from the certain inflation mess he would create running the Federal Reserve’s printing press at a rate of $85 billion per month. While core inflation doesn’t account for the fluctuation of energy prices, lower energy prices keep the costs of goods lower than they would otherwise be. Ultimately, these factors combine to make for a strong U.S. dollar. The combination of inflation kept in check and a strong dollar are very bearish for gold. Earlier this week, Barclays Capital slashed its price target on the metal from $1,778 per ounce to $1,646 per ounce. While the firm citing falling demand for the ETF as a major catalyst for the downgrade, gold has been struggling and may continue to do so for some time.