Sometimes, even seemingly boring companies can pull a rabbit out of the proverbial hat. That is certainly what happened when Barnes & Noble, Inc. (NYSE:BKS) revealed that their Nook HD lineup would now add Google Inc (NASDAQ:GOOG) Play to its products. I won’t suggest that this move will solve all of Barnes & Noble’s ills, but it is a massive step in the direction toward changing the tablet game.

The reason tablets are so popular

Having owned an iPad for a few years, I can tell you first hand the few reasons that tablets have come into their own. The iPad and the current slate (pardon the pun) of tablets has changed the game. Tablets can do what laptops used to do for most people, but better.

In my household, we need a laptop for my job, but my wife doesn’t need a laptop for her to surf the web, go on Facebook, e-mail, and more. That’s why she has an iPad. I believe many households have realized that having a tablet makes sense. Given the choice between spending a few hundred on a cheap laptop that’s heavy, slow, and hard to carry around, or a light tablet, with great battery life, that’s fast, the choice is easy.

The point of all of this is to say, the tablet market isn’t going anywhere, and the company with the best device will ultimately benefit. In fact, market research shows the tablet market exploding from about 233 million devices in 2013 to over 1 billion shipments by 2017.

Why should you care?

To be honest, the curveball of the Nook HD having Google Inc (NASDAQ:GOOG) Play has the potential to change the tablet landscape. 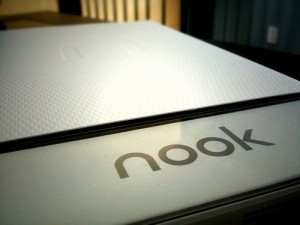 Barnes & Noble, Inc. (NYSE:BKS) was having trouble convincing consumers to buy the Nook because when consumers think tablets, they think apps. With around 10,000 apps for the Nook, versus about 700,000 on Google Inc (NASDAQ:GOOG) Play, Barnes & Noble just jumped into the full fledged Android business.

The move couldn’t come soon enough based on market research. As most people know, the king of tablets is Apple Inc. (NASDAQ:AAPL), which, according to IDC research, had 43.6% market share in the fourth quarter, and their shipments grew by 48.1%. Samsung’s Android-based tablets came in second, with a 15.1% market share and 263% growth.

By allowing the Nook HD lineup to become full Android devices, not only should Barnes & Noble, Inc. (NYSE:BKS) see increased sales, but you could make the argument that these are now the best tablet values available.

Line them up and nook knocks them down

In the tablet market, eco-system wins out over everything. The reason I can make that statement is, Apple Inc. (NASDAQ:AAPL) and Samsung are first and second, and they run the two most popular mobile operating systems in iOS and Android. Their devices may not have the best displays, or the best specs, but consumers know that apps matter.

Apple Share Price: Why Exactly Is It On The Comeback Trail?

Clearwire Corporation (CLWR): The Day of ReckoningApple Inc. (AAPL): Here’s What You Should Expect