Like everyone else, elite investors make mistakes. Some of their top consensus picks, such as Amazon, Facebook and Alibaba, did not do well in October due to various reasons. Nevertheless, the data shows elite investors’ consensus picks have done well on average over the long-term. The top 30 S&P 500 stocks among hedge funds at the end of September 2018 returned an average of 6.7% through November 15th whereas the S&P 500 Index ETF gained only 2.6% during the same period. Because their consensus picks have done well, we pay attention to what elite funds think before doing extensive research on a stock. In this article, we take a closer look at Barclays PLC (NYSE:BCS) from the perspective of those elite funds.

Hedge funds grew a lot more bullish on Barclays PLC (NYSE:BCS) in Q3, as hedge fund ownership jumped by over 50%. One of the 25 Dividend Stocks that Billionaire Ken Fisher is Bullish On, the U.K bank announced in February that it would double its 2018 dividend after profits rose by 10% in 2017, which has pushed its dividend yield over 3%.

To the average investor there are several signals investors use to assess publicly traded companies. A pair of the less utilized signals are hedge fund and insider trading activity. Our experts have shown that, historically, those who follow the top picks of the top hedge fund managers can trounce their index-focused peers by a very impressive margin (see the details here).

Heading into the fourth quarter of 2018, a total of 11 of the hedge funds tracked by Insider Monkey were bullish on this stock, a 57% jump from the second quarter of 2018. The graph below displays the number of hedge funds with bullish position in BCS over the last 13 quarters. With hedge funds’ sentiment swirling, there exists a select group of notable hedge fund managers who were boosting their holdings meaningfully (or already accumulated large positions). 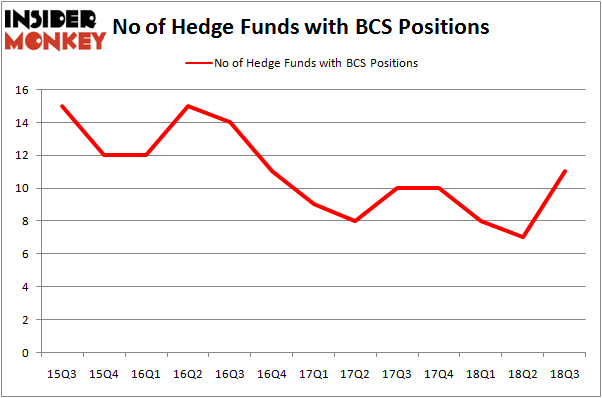 More specifically, Eagle Capital Management was the largest shareholder of Barclays PLC (NYSE:BCS), with a stake worth $404.1 million reported as of the end of September. Trailing Eagle Capital Management was Fisher Asset Management, which amassed a stake valued at $144.8 million. Arrowstreet Capital, Marshall Wace LLP, and Citadel Investment Group were also very fond of the stock, giving the stock large weights in their portfolios.

As industry-wide interest jumped, specific money managers were leading the bulls’ herd. Arrowstreet Capital, managed by Peter Rathjens, Bruce Clarke and John Campbell, assembled the biggest position in Barclays PLC (NYSE:BCS). Arrowstreet Capital had $17.5 million invested in the company at the end of the quarter. Paul Marshall and Ian Wace’s Marshall Wace LLP also initiated a $9.5 million position during the quarter. The other funds with new positions in the stock are Michael Platt and William Reeves’ BlueCrest Capital Mgmt. and Israel Englander’s Millennium Management.

As you can see these stocks had an average of 30 hedge funds with bullish positions and the average amount invested in these stocks was $2.23 billion. That figure was $584 million in BCS’s case. Applied Materials, Inc. (NASDAQ:AMAT) is the most popular stock in this table. On the other hand Credit Suisse Group AG (NYSE:CS) is the least popular one with only 13 bullish hedge fund positions. Compared to these stocks Barclays PLC (NYSE:BCS) is even less popular than CS. Considering that hedge funds aren’t fond of this stock in relation to other companies analyzed in this article, it may be a good idea to analyze it in detail and understand why the smart money isn’t behind this stock.