Aug. 30, 2009, is a day my portfolio will not soon forget.  That was the day I lost my largest holding.  The day that the company I believed in more than any other was taken from me.  The company that had the largest potential for growth was absorbed into another.  It was the day that The Walt Disney Company (NYSE:DIS) announced they were buying my beloved Marvell Technology Group Ltd. (NASDAQ:MRVL).

I’m not exactly a comic book junky, but I was elated with the then-brand new Marvel Studios. Apparently, so was Disney.  They bought Marvel out for around 30% more than it’s market cap at the time.  Although I was offered Disney shares, I was so upset I was losing Marvel, that I wanted nothing to do with The Walt Disney Company (NYSE:DIS).  I sold all my shares of Marvel.  Now, some will point out the good part of that deal: overnight my investment jumped 26% because of the buyout.

I frequently get comments from investors saying that they are buying into a company in hopes of this scenario.  They buy a company hoping that it is soon bought out.  But this may not be the best way to boost your portfolio.

Research In Motion Ltd (NASDAQ:BBRY) (now known as BlackBerry) has been subject to many takeover rumors.  Rumored suitors include Microsoft Corporation (NASDAQ:MSFT), Hewlett-Packard Company (NYSE:HPQ), and Lenovo.  Here’s why. 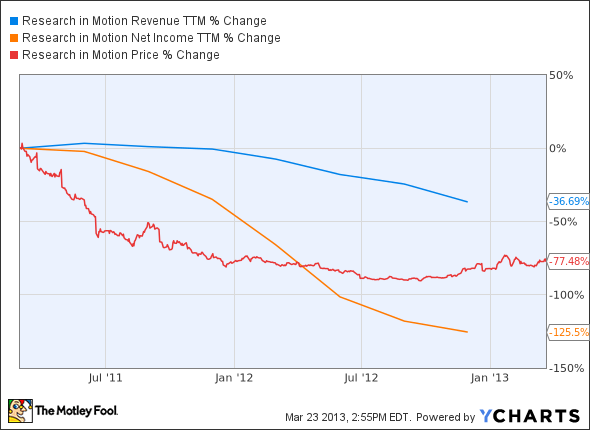 Since the start of 2011, things haven’t been going well for Research In Motion Ltd (NASDAQ:BBRY).  In large part, the once cool Research in Motion Ltd (NASDAQ:BBRY) has been replaced by a lot of other phones on the market.  Both revenue and net income have been falling at an alarming rate, and the stock price has followed the downward herd.  As an investor, I have serious doubts about the future of the company.

WebMD Health Corp. (NASDAQ:WBMD) is an investment that doesn’t make a lot of sense either.  Basically the company has a fairly large market cap, but they don’t make that much money.  Rumored buyers have been Yahoo! Inc. (NASDAQ:YHOO) and Alibaba.  While these rumors have been largely downplayed, some investors still want to get in for the potential big jump the stock will have when it is bought out.

Part of WebMD’s problem has been a failure to capitalize on the growing amount of users accessing their information on mobile devices.  They are going to have to figure out how to make the mobile applications as lucrative as the traditionally accessed website, and I have yet to hear how they plan to do this.  In fact, the most concrete plan I’ve heard from WebMD Health Corp. (NASDAQ:WBMD) is that they plan on losing between $0.13-$0.45 per share next year. Doesn’t sound like a good plan to me.

The Avon Products, Inc. (NYSE:AVP) buyout isn’t so much a rumor as something that almost happened.  Coty Inc tried to buy the company out, but Avon wasn’t really interested.  After that Coty withdrew its offer. 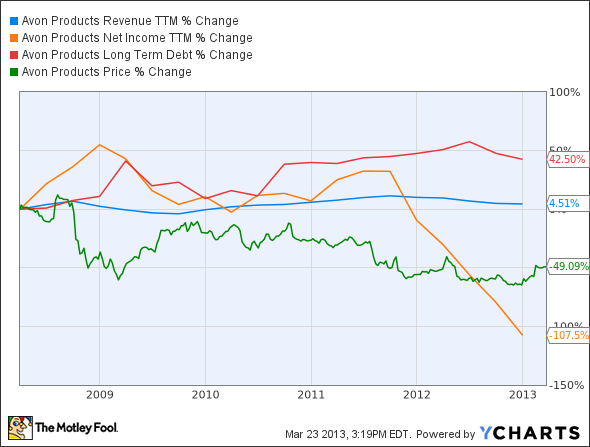 As you can see, Avon is facing some pretty serious headwinds.  Revenue is essentially flat over the last five years.  Net income is plummeting.  Long term debt is growing.  What is going on at Avon leaves me with some serious doubts.