Bank of the Ozarks Inc (OZRK), Regions Financial Corporation (RF): Why This Bank Is Among the Best of the Breed

It’s time again to review one of my favorite and easiest stocks to recommend: Bank of the Ozarks Inc (NASDAQ:OZRK). Bank of the Ozarks operates just over 100 banks in the southern U.S., primarily in Arkansas and Georgia. This stock has been a model of consistency and market outperformance. Even when the market got smacked in 2008 and early 2009, Bank of The Ozarks Inc (NASDAQ:OZRK) barely budged. Since then, the stock has rocketed higher. 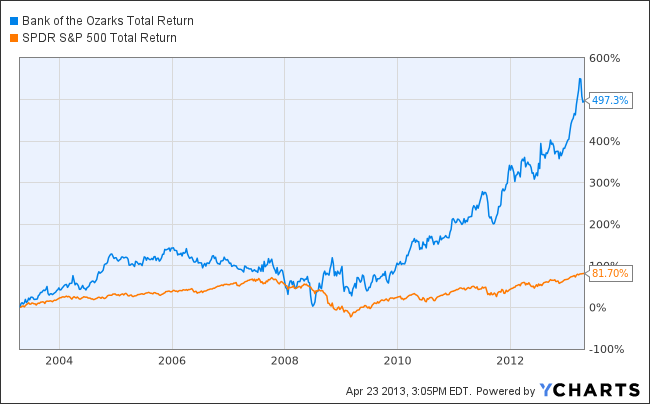 What has driven the big rally since the beginning of 2010? Extra growth, mostly in the form of cheap acquisitions handed to them by the FDIC. Historically, Bank of The Ozarks Inc (NASDAQ:OZRK) has focused on organic growth at a steady pace, preferring to let good operations drive much of the consistent growth. Now, because of the past financial crisis, Bank of the Ozarks has the opportunity to acquire failed banks at relatively little cost.

When banks fail to remain in good standing, the FDIC (Federal Deposit Insurance Corporation) takes action. The failing bank is closed and its assets are given to a bank whose balance sheet and operations are strong. What’s more, the acquiring bank not only gets the assets of the failed banks, but the FDIC will also share in much of the losses that the failed bank produces. The exact details of the FDIC loss share can be found in Bank of The Ozarks Inc (NASDAQ:OZRK)’ 10-K filing, but in very simple terms, the FDIC will take roughly 80% of any losses incurred on assets transferred to Bank of the Ozarks.

What sets Bank of the Ozarks apart from other banks is their net interest margin. Net interest margin is the difference between what yield the bank earns on its assets and the interest that the bank pays out on deposits and other funding sources. For the first quarter of 2013, which was just reported, the company had a 5.83% net interest margin. That’s astounding! And it’s not a one-time occurrence. In fact, that’s down from the 6% margin in 2012, but excellent nonetheless.

For comparison purposes, let’s take a look at some similar companies:

Clearly, Bank of the Ozarks’ net interest margin stands head-and-shoulders above similar companies. BB&T is pulling in a solid 3.76%, but still cannot come close to Bank of The Ozarks Inc (NASDAQ:OZRK) at 5.83%.