Bank of Montreal (NYSE:BMO) shares haven’t seen a lot of action during the third quarter. Overall, hedge fund sentiment was unchanged. The stock was in 13 hedge funds’ portfolios at the end of the third quarter of 2018. At the end of this article we will also compare BMO to other stocks including Micron Technology, Inc. (NASDAQ:MU), Phillips 66 (NYSE:PSX), and The Bank of New York Mellon Corporation (NYSE:BK) to get a better sense of its popularity.

If you’d ask most market participants, hedge funds are assumed to be unimportant, old investment vehicles of years past. While there are more than 8,000 funds with their doors open at the moment, Our researchers look at the masters of this group, about 700 funds. Most estimates calculate that this group of people preside over most of the hedge fund industry’s total capital, and by tracking their best picks, Insider Monkey has come up with a few investment strategies that have historically outperformed Mr. Market. Insider Monkey’s flagship hedge fund strategy outpaced the S&P 500 index by 6 percentage points per year since its inception in May 2014 through early November 2018. We were able to generate large returns even by identifying short candidates. Our portfolio of short stocks lost 24% since February 2017 (through December 3rd) even though the market was up nearly 23% during the same period. We just shared a list of 11 short targets in our latest quarterly update.

What have hedge funds been doing with Bank of Montreal (NYSE:BMO)?

At the end of the third quarter, a total of 13 of the hedge funds tracked by Insider Monkey were long this stock, no change from the previous quarter. The graph below displays the number of hedge funds with bullish position in BMO over the last 13 quarters. With the smart money’s positions undergoing their usual ebb and flow, there exists a few key hedge fund managers who were adding to their holdings considerably (or already accumulated large positions). 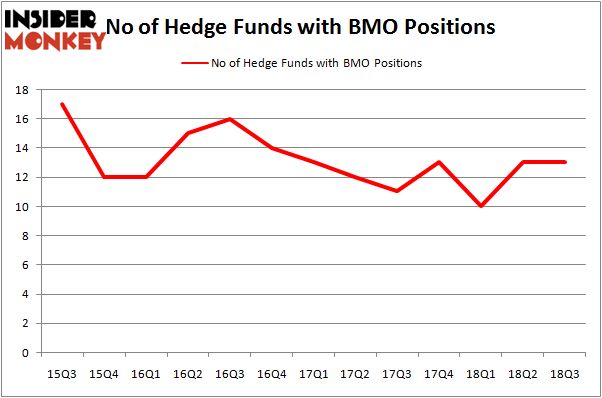 Among these funds, Arrowstreet Capital held the most valuable stake in Bank of Montreal (NYSE:BMO), which was worth $396.2 million at the end of the third quarter. On the second spot was GLG Partners which amassed $59.8 million worth of shares. Moreover, D E Shaw, Renaissance Technologies, and Two Sigma Advisors were also bullish on Bank of Montreal (NYSE:BMO), allocating a large percentage of their portfolios to this stock.

Since Bank of Montreal (NYSE:BMO) has faced a decline in interest from the aggregate hedge fund industry, it’s safe to say that there exists a select few money managers that elected to cut their entire stakes heading into Q3. It’s worth mentioning that Dmitry Balyasny’s Balyasny Asset Management cut the largest position of all the hedgies watched by Insider Monkey, totaling close to $0.6 million in stock, and Alec Litowitz and Ross Laser’s Magnetar Capital was right behind this move, as the fund dropped about $0.2 million worth. These moves are important to note, as aggregate hedge fund interest stayed the same (this is a bearish signal in our experience).

Let’s also examine hedge fund activity in other stocks – not necessarily in the same industry as Bank of Montreal (NYSE:BMO) but similarly valued. We will take a look at Micron Technology, Inc. (NASDAQ:MU), Phillips 66 (NYSE:PSX), The Bank of New York Mellon Corporation (NYSE:BK), and CIGNA Corporation (NYSE:CI). All of these stocks’ market caps match BMO’s market cap.

As you can see these stocks had an average of 50.25 hedge funds with bullish positions and the average amount invested in these stocks was $4.11 billion. That figure was $659 million in BMO’s case. CIGNA Corporation (NYSE:CI) is the most popular stock in this table. On the other hand The Bank of New York Mellon Corporation (NYSE:BK) is the least popular one with only 39 bullish hedge fund positions. Compared to these stocks Bank of Montreal (NYSE:BMO) is even less popular than BK. Considering that hedge funds aren’t fond of this stock in relation to other companies analyzed in this article, it may be a good idea to analyze it in detail and understand why the smart money isn’t behind this stock. This isn’t necessarily bad news. Although it is possible that hedge funds may think the stock is overpriced and view the stock as a short candidate, they may not be very familiar with the bullish thesis. In either case more research is warranted.