The good news is that the number is shrinking. According to a new report from CoreLogic, there were a total of 49,000 completed foreclosures in July. This was 8.6% less than June and 25% below the same month last year. To see the figures for the previous month, click here. The bad news is that we still have a long way to go before things normalize. Between 2000 and 2006, CoreLogic estimates there was an average of only 21,000 completed foreclosures each month. The current rate will need to fall by 57% to get back to that level.

As I noted last month, it probably goes without saying that the number of completed foreclosures here has a lot to do with the population of the state in question. Take North Dakota and Maine as examples. These are two of the least populated states in the country. It makes sense, in other words, that they would have among the fewest foreclosures.

More telling, in turn, is the foreclosure inventory as a percent of mortgaged homes. The tides are reversed in this regard for at least Maine and Hawaii, which sport among the highest percentages of any state. The national average is 2.4%.

Percentages aside, the benefit of the relative health of these housing markets can be seen in the performance of smaller, regional banks like Bank of Hawaii Corporation (NYSE:BOH), BB&T Corporation (NYSE:BBT), and Toronto-Dominion Bank (USA) (NYSE:TD) which have large presences in Hawaii, West Virginia, and Maine, respectively.

As you can see in the chart below, while the KBW Bank Index is still below its pre-crisis level, shares of all three of these banks have more than recovered since the beginning of 2008 as a testament to this. 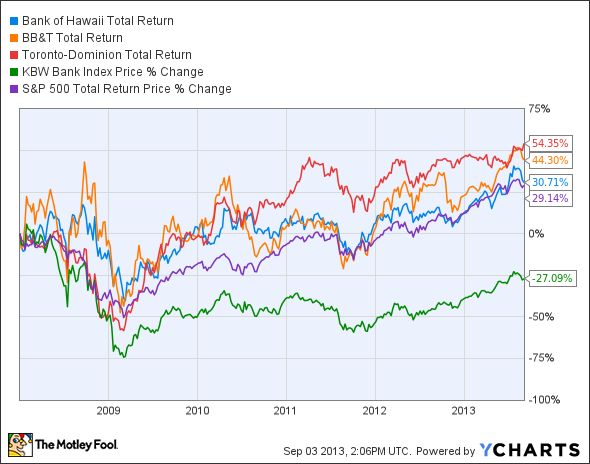 These facts go a long way toward explaining why investors like Warren Buffett are so interested in smaller, high-quality lenders that have proven to be bastions of safety and profit.

The article 5 States With the Fewest Home Foreclosures in July originally appeared on Fool.com and is written by John Maxfield.

John Maxfield has no position in any stocks mentioned. The Motley Fool owns shares of Bank of Hawaii.