Investors hoping for the stock market to stabilize after having made volatile moves in both directions earlier in the week were disappointed today, as downbeat data on the economic front led to further concerns about whether the recovery can continue to lift stocks higher. Jobless claims rose, and a key barometer of future economic activity fell. In addition, a fairly weak auction of Treasury Inflation-Protected Securities raised questions about whether the bond market will continue to behave if the ongoing turmoil continues. By the end of the day, the Dow Jones Industrial Average (INDEXDJX:.DJI) had fallen 81 points. 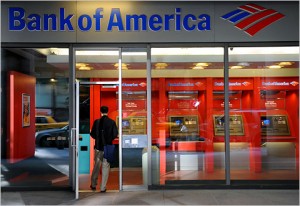 Leading the way down for the Dow was UnitedHealth Group Inc. (NYSE:UNH), which fell almost 4% after its earnings report included an example of what could become a troubling trend, as a major customer chose to convert from a full-risk insurance plan to a self-insurance fee-based model. But elsewhere in the Dow, Bank of America Corp (NYSE:BAC) fell another 2%, adding to losses that have taken the stock down nearly 10% in the past month. Following its earnings report, Bank of America Corp (NYSE:BAC) faces a big challenge: how to move past the capital-restoration stage of its recovery and find ways to foster new growth opportunities. With most of the easy work already having been done, Bank of America Corp (NYSE:BAC) will face competitive pressure and difficult environmental conditions in trying to navigate its way to a stronger turnaround.

Beyond the Dow, eBay Inc (NASDAQ:EBAY) fell almost 6% after disappointing investors with its quarterly report. Although the online marketplace saw its usual seasonal weakness in the quarter following the holidays, guidance for the current quarter confirmed that sales growth hasn’t been as strong as investors were expecting. A group of analysts took actions that included reducing estimates, cutting price targets, and downgrading the stock’s rating; but, going forward, (NASDAQ:EBAY) still has promise both in its namesake auction business, and its PayPal electronic payments service.

The article Blame These Stocks for the Dow’s Down Day originally appeared on Fool.com.

Fool contributor Dan Caplinger has no position in any stocks mentioned. You can follow him on Twitter @DanCaplinger. The Motley Fool recommends eBay. The Motley Fool owns shares of Bank of America Corp (NYSE:BAC) and (NASDAQ:EBAY).