This morning the National Federation of Independent Business said its Small Business Optimism Index improved by roughly one point to 88.9. That’s the fourth-lowest reading of expectations for improved business conditions in the survey’s 38-year history. NFIB Chief economist Bill Dunkelberg said: “With the dismal news that our economy actually contracted in the fourth quarter of 2012, it isn’t any wonder that more small firms expect their real sales volumes to fall, few have plans to invest in new inventory, and hardly any owners are expanding or hiring. Owner pessimism is certainly not surprising in light of higher taxes, rising health insurance costs, increasing regulations, and just plain uncertainty”

We will have more information on whether small-business owners’ fears are warranted tomorrow when the Department of Commerce reports January retail sales. Economists don’t have such low expectations as small-business owners, predicting no growth, whereas earlier economic reports have showed a slowing economy.

The second economic release was from the Department of Labor, which reported that job openings fell 2.6% from November’s four-year high of 3.79 million to 3.62 million in December. Year over year, job openings were up 2%. 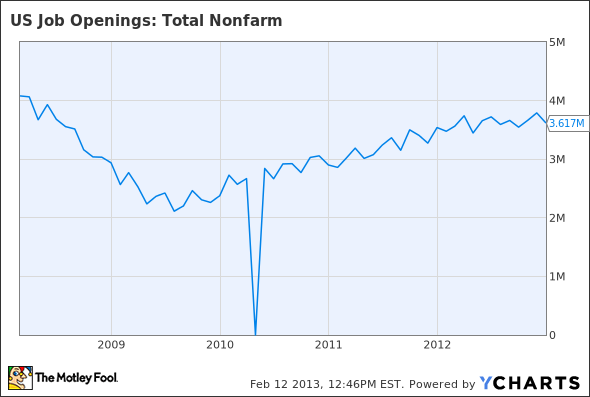 Today is markedly more positive than yesterday, with 25 of 30 Dow stocks up so far.

Today’s Dow leader
Today’s Dow leader is Bank of America Corp (NYSE:BAC) , up 2.8% to meet its 52 week high of $12.20. Banks’ financial results are highly dependent upon the health of the economy, so given today’s mixed news, you wouldn’t expect financial stocks to be up. In today’s risk-on, risk-off world, however, it’s no surprise that Bank of America is leading the market’s rise.

Many investors are bullish on the stock, including star mutual-fund manager Bruce Berkowitz. Bank of America makes up 9% of his fund. With the stock trading below book value and the business improving, Berkowitz thinks he could end up quadrupling his money on Bank of America. Berkowitz believes Bank of America has done a great job of taking charges against bad assets and dealing with its numerous legal problems.

The article Bank of America Leads the Dow Higher originally appeared on Fool.com and is written by Dan Dzombak.