This morning the National Association of Home Builders released its Housing Market Index, which measures homebuilder confidence. Homebuilder confidence was relatively unchanged, down just one point to 46. Analysts had expected homebuilder confidence to rise to 48. A level below 50 indicates that more builders see conditions as negative rather than positive. It’s important to note that 46 is still far above the HMI’s February 2012 level of 28 and up more than fivefold from the low of eight hit in January 2009. 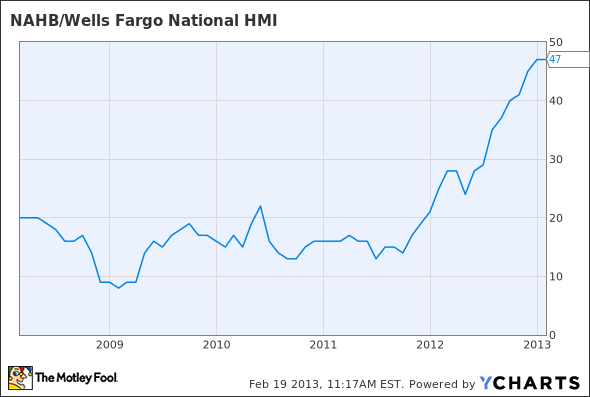 Following solid gains over the past year, builder confidence has essentially leveled out and held in the same three-point range over the last four months. This is partly due to ongoing uncertainties about job growth and consumer access to mortgage credit, but it’s also a reflection of the fact that builders are now confronting rising costs for building materials and, in some markets, limited availability of labor and lots as demand for new homes strengthens.

Other news included surprising German analyst confidence. The ZEW Indicator of Economic Sentiment for Germany increased by 16.7 points in February to 48.2, up from 31.5 in January. Eurozone stocks rallied on the news, while the Euro (EURUSD=X) barely moved. 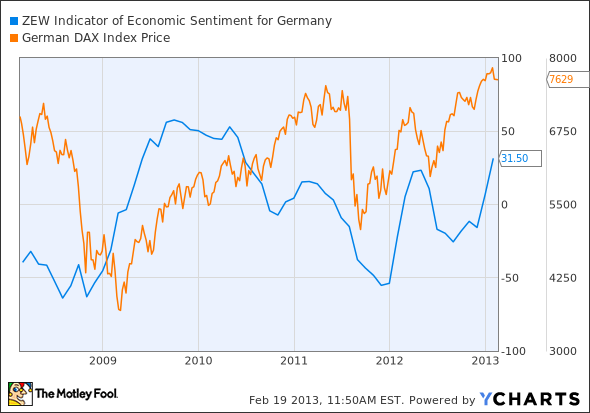 ZEW Indicator of Economic Sentiment for Germany data by YCharts.

The index is compiled by surveying the expectations of 350 economists and analysts on their opinions of Germany’s economic future. Interestingly, analysts expected a level of 35, showing that analysts are not good at predicting their own expectations. I see the jump as analysts following the market’s rise.

Today is markedly more positive than Friday was, with 21 of 30 Dow stocks up.

Today’s Dow Leader
Today’s Dow leader is Bank of America Corp (NYSE:BAC), up 2.1% to $12.29 — just below its 52-week high of $12.42. Bank of America has been on a tear the past six months, rising 53%. Banks’ results depend largely on the economy, so anytime there’s positive news about the economy, bank stocks tend to do well. Bank of America also stands to benefit as mergers and acquisitions activity picks up. The bank’s Merrill Lynch division currently ranks second in the M&A table.

While things are looking up for Bank of America, the bank has some serious threats to deal with. From cyber attacks to the numerous and varied lawsuits against the bank, Bank of America has some work to do.

The article Bank of America Leads the Dow Higher originally appeared on Fool.com and is written by Dan Dzombak.