The Bank of New York Mellon Corporation (NYSE:BK) reported first-quarter earnings on Wednesday, and while tidings are grim, they’re aren’t quite as grim as they first appear. Here are three key takeaways for investors.

1. Net-income loss of $266 million
Savvy investors saw this one coming, but it’s a shock to see it in black-and-white nonetheless. The bank had previously announced it was going to take a $854 million hit for disallowed foreign-tax credits, courtesy of U.S. Tax Court, but first-quarter 2013 is where the rubber met the road.

The nearly billion-dollar charge came right off BNY Mellon’s bottom line, changing what would have been a $588 million profit into the aforementioned $266 million loss, translating into earnings per common share of -$0.23. The bank plans to appeal the tax court’s ruling. 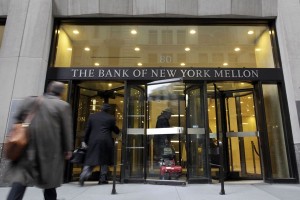 The silver lining here? BNY Mellon isn’t Bank of America Corp (NYSE:BAC), which can almost be counted on to have some big charge or write-off every quarter, typically relating back to misbehavior committed during the housing boom. The Bank of New York Mellon Corporation (NYSE:BK) operates very conservatively, so investors can reasonably assume that this big bottom-line hit was a one-off.

The Bank of New York Mellon Corporation (NYSE:BK) is what’s known as a “trust bank.” It’s essentially a bank for other banks, as well as for corporations. Trust banks make the bulk of their money from the fees and services they provide to said banks and corporations, so it’s big news when these fees are up.

Versus other big banks reporting for the first quarter, a drop in revenue of only 1% is good. JPMorgan Chase & Co. (NYSE:JPM) reported a nearly 4% drop in year-over-year total revenue. And Wells Fargo & Co (NYSE:WFC) reported a 1.4% drop. It’s tough out there, and BNY Mellon is holding its own. At least that’s one way of looking at it.