Unlike the rest of its peers, Bank of America Corp (NYSE:BAC) reported an earnings miss on a revenue beat on legal-settlement stings. For the first quarter, Bank of America reported earnings per shares of $0.20, which was $0.02 below the consensus estimate, while the reported revenue of $23.7 billion was $200 million ahead of estimates. The first quarter revenue was also 5% above the revenue from a year ago.

While reviewing Bank of America’s latest earnings and comparing the bank with its closest peers, I find that Citigroup Inc. (NYSE:C) and Wells Fargo & Co (NYSE:WFC) have more robust capital bases. Also, in the past Bank of America has been in the news for the enormous litigation expenses that continued to hinder the growth in its bottom line. The situation was not very different this time around as well. Owing to this and other reasons mentioned in the remainder of the report, I prefer Citigroup over Bank of America Corp (NYSE:BAC).

Among the result highlights were the Bank of America’s cost-cutting efforts, which paid off as the non-interest expense of approximately $18.2 billion were down $1 billion from a year ago. Besides, Bank of America was able to decrease its headcount to 262,800  from 278,700 in the prior year. The net interest income of $10.9 billion during the quarter decreased $11.8 billion from a year ago. The bank’s reported net interest margin of 2.4% declined 8 basis points (bps) over a year ago. 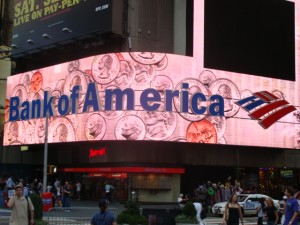 Total revenue of $23.7 billion for Bank of America Corp (NYSE:BAC) increased 25% over the linked quarter. Much of the improvement in the top line was a result of fee income, which increased 54% over the same time period.

Non-interest expenses of approximately $18.2 billion for Bank of America were down 5% over the prior year majorly due to Project New BAC. However, it was still above the linked quarter’s expenses. Bank of America expects total savings of $8 billion each year from its Project New BAC, which is an initiative aimed at reducing operating costs. This is $2 billion in cost savings each quarter. Despite the focus on expenses, the bank’s efficiency ratio remained elevated at 78.9%, compared to 97.2% at the end of the fourth quarter of the prior year.

During the quarter, Bank of America Corp (NYSE:BAC) incurred litigation expenses of $881 million, compared to $916 million during the linked quarter. Much of the costs are associated to a class action settlement between Countrywide and various other plaintiffs concerning toxic residential mortgage-backed securities.

As a result, Bank of America’s bottom line came in at $2.6 billion, up considerably from the linked quarter’s bottom line of $732 million.