There were two economic releases this morning:

After reporting bad earnings, Bank of America is down 4.4% to $11.26, and Citigroup is down 3.2% to $41.12. Both banks were hamstrung by all sorts of “one-time” charges, including legal fees, mortgage writedowns, and foreclosure reviews, among many others. “One-time” charges have become the rule, rather than the exception, at many banks. Despite the bad earnings, Fool analyst John Maxfield still likes Bank of America and is preaching patience.

The Dow is overlooking the bad earnings from the banks and is instead focusing on today’s economic releases. The first report was from the Department of Labor, which reported that new initial unemployment claims fell by 37,000 to 335,000. That’s far below analyst expectations of 368,000. This week’s low level brings the less volatile four-week average down by 6,750 to 359,250. That’s roughly the average’s lowest level since 2008. 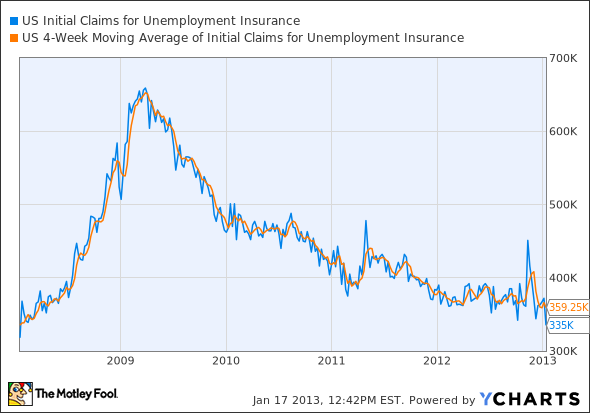 The second report was from the Department of Commerce, which reported that housing starts rose to an annual rate of 954,000. That is significantly above last month’s rate of 851,000 and above analyst expectations of 883,000. The housing market strengthened throughout 2012, and that trend will hopefully continue through 2013. 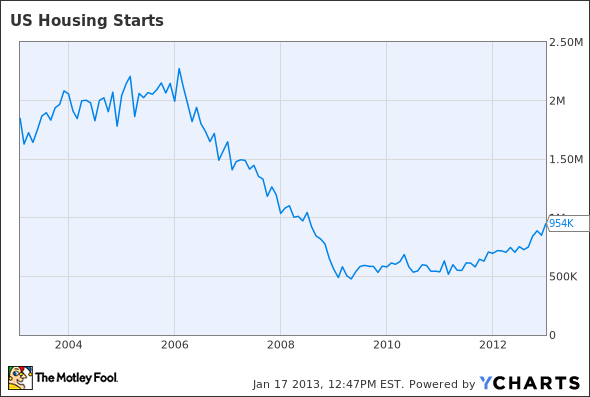