Bank of America Corp (NYSE:BAC) had a pretty decent week, relatively speaking. It was boosted earlier in the week when news of a settlement with MBIA reached the markets, and even some threatened legal action by the state of New York didn’t affect it all that much. Even Friday morning, with Citigroup Inc (NYSE:C) and JPMorgan Chase & Co. (NYSE:JPM) relatively flat, Bank of America Corp (NYSE:BAC) remains slightly higher.

Meeting resistance
It was a little less than two weeks ago that my colleague John Grgurich wondered if Bank of America Corp (NYSE:BAC) would remain closer to $10 than not. Obviously, it seems to have pushed past this threshold, but it seems to be meeting resistance around $13 a share. Granted, it is only in the past couple of days that the stock has traded above this level, but there has been numerous times over the past few months where it has approached, but not exceeded, this price: 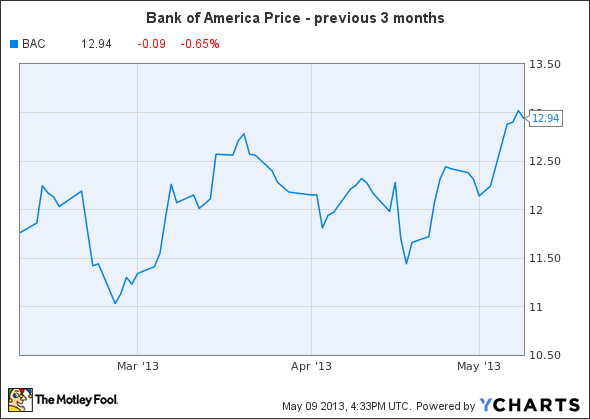 What does it mean?
In general, we at the Fool believe that daily stock price movements are unimportant unless there is some news surrounding the move. With a stock that gets as much coverage as Bank of America Corp (NYSE:BAC), however, sometimes it’s important to see if there are any reasons why it’s not moving and where it could ultimately end up.

Based on its book value alone, there seems to be plenty of room for Bank of America to grow. However, the consensus analyst estimate is currently $12.87, meaning it is trading just north of what the “experts” seem to think. Personally, I think the true value of the bank lies somewhere between its book value and tangible book value, so it’s only a matter of time before it manages to leave $13 solidly in its rearview mirror as it heads toward these heights.

The article Is $13 the New Ceiling for Bank of America? originally appeared on Fool.com.