Investors love stocks that consistently beat the Street without getting ahead of their fundamentals and risking a meltdown. The best stocks offer sustainable market-beating gains, with robust and improving financial metrics that support strong price growth. Does Apache Corporation (NYSE:APA) fit the bill? Let’s take a look at what its recent results tell us about its potential for future gains.

The graphs you’re about to see tell Apache Corporation (NYSE:APA)’s story, and we’ll be grading the quality of that story in several ways:

1). Growth: are profits, margins, and free cash flow all increasing?
2). Valuation: is share price growing in line with earnings per share?
3). Opportunities: is return on equity increasing while debt to equity declines?
4). Dividends: are dividends consistently growing in a sustainable way? 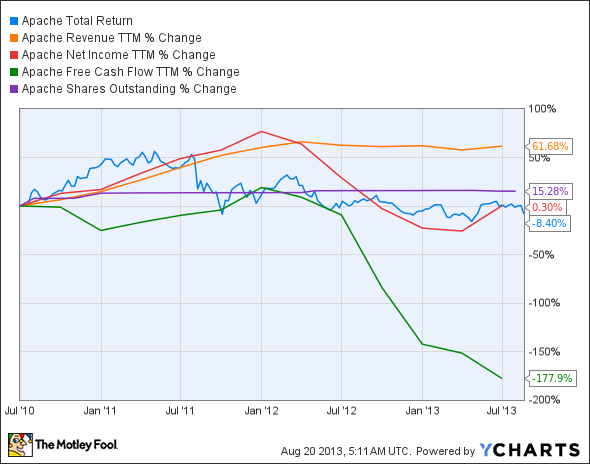 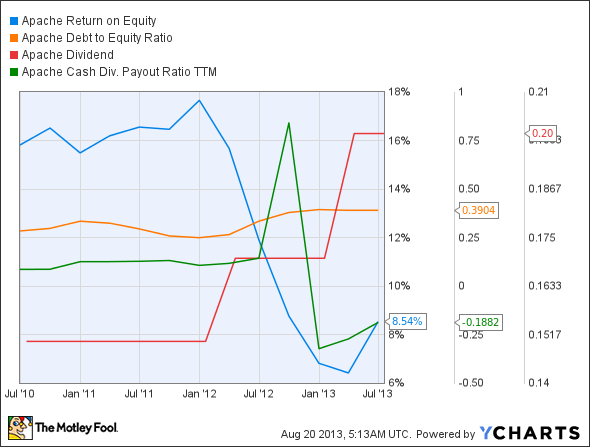 Things don’t look too favorable for Apache Corporation (NYSE:APA) today, as the oil and gas explorer has mustered only two out of nine possible passing grades. Declining free cash flow, combined with weaker profit margins, have contributed to the bulk of Apache’s underperformance today. Will Apache be able to overcome this weakness, or will investors decide to turn off the gas on this stock? Let’s dig a little deeper.

Despite sustained high crude oil prices, Apache Corporation (NYSE:APA) has disappointed in its latest quarter because of the continuing political disruption and turbulence in Egypt. The company possesses a significant amount of oil assets in Egypt, which produced more than 363,000 barrels of oil equivalent per day over the last few months. However, high costs of production have made it extremely difficult for Apache to reap profits from these assets. Fool contributor Matt DiLallo notes that a major concern for Apache is instability regarding the Suez Canal — a major oil transit route — which could be potentially shut down if Egypt fails to get its affairs in order after grinding through its second mass uprising and regime change in only three years.

In a recent announcement, Apache has decided to divest its assets located in Nevis and the North and South Grant Lands of Canada to Ember Resources, at a price of $214 million. That’s only going to help patch over a smallish portion of the nearly $1.9 billion in negative free cash flow Apache’s reported over the past four quarters, but since Apache has less than $200 million in cash on hand at the moment, it might be a necessary short-term measure.

My foolish colleague Isac Simon notes that Apache has been aggressively building its capabilities in the Gulf of Mexico. According to a report published by Baker Hughes Incorporated (NYSE:BHI), there are around 57 rigs, including 43 rigs exclusively drilling for oil, actively exploring in the region. Quite recently, Apache has bought 14 (nine shallow-water and five deepwater) blocks in the Gulf for more than $1.2 billion.