Is Baker Hughes, a GE company (NYSE:BHGE) a healthy stock for your portfolio? The best stock pickers are becoming more confident. The number of long hedge fund positions advanced by 7 lately, and the company was in 27 hedge funds’ portfolios at the end of the third quarter of 2018. It has not managed, however, to attract that many of the wealthiest hedge fund managers. (To see which stock did take a look at the list of 30 stocks billionaires are crazy about: Insider Monkey billionaires stock index.) Seeing that stock has been raising interest from smart money investors, we were intrigued to find out more. So, we tracked down what Poplar Forest said about it in its last Quarterly Letter:

“Baker Hughes (ticker: BHGE), the second largest oilfield services company, is in the midst of integrating with GE’s oil and gas businesses. It is undertaking a meaningful effort to streamline operations and realize synergies with the potential to double operating margins, earnings and cash flow over the next few years. A low debt level is also allowing it to repurchase shares at what we believe are attractive prices. Despite this, Baker Hughes remains out of favor and trades at a discount to both peers and its own history, in part due to investor concern over an eventual GE exit.”

Heading into the fourth quarter of 2018, a total of 27 of the hedge funds tracked by Insider Monkey were bullish on this stock, a change of 35% from one quarter earlier. Below, you can check out the change in hedge fund sentiment towards BHGE over the last 13 quarters. So, let’s find out which hedge funds were among the top holders of the stock and which hedge funds were making big moves. 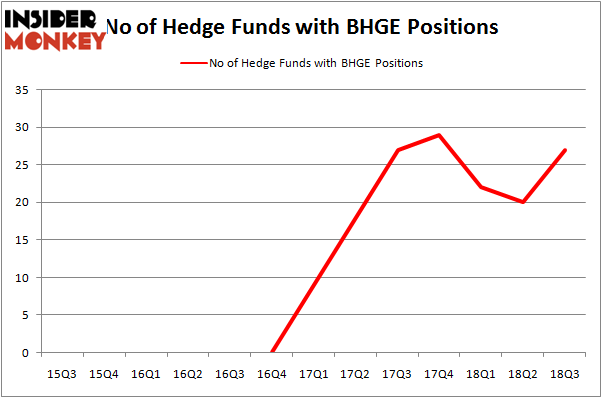 More specifically, Millennium Management was the largest shareholder of Baker Hughes, a GE company (NYSE:BHGE), with a stake worth $198.9 million reported as of the end of September. Trailing Millennium Management was Citadel Investment Group, which amassed a stake valued at $128.2 million. Balyasny Asset Management, Point72 Asset Management, and Two Sigma Advisors were also very fond of the stock, giving the stock large weights in their portfolios.

With a general bullishness among the heavyweights, key money managers were leading the bulls’ herd. Balyasny Asset Management, managed by Dmitry Balyasny, assembled the largest position in Baker Hughes, a GE company (NYSE:BHGE). Balyasny Asset Management had $99 million invested in the company at the end of the quarter. Steve Cohen’s Point72 Asset Management also initiated a $80.3 million position during the quarter. The other funds with new positions in the stock are Clint Carlson’s Carlson Capital, Todd J. Kantor’s Encompass Capital Advisors, and Brandon Haley’s Holocene Advisors.

Let’s also examine hedge fund activity in other stocks – not necessarily in the same industry as Baker Hughes, a GE company (NYSE:BHGE) but similarly valued. We will take a look at V.F. Corporation (NYSE:VFC), Ross Stores, Inc. (NASDAQ:ROST), Ford Motor Company (NYSE:F), and Electronic Arts Inc. (NASDAQ:EA). All of these stocks’ market caps are closest to BHGE’s market cap.

As you can see these stocks had an average of 43 hedge funds with bullish positions and the average amount invested in these stocks was $1.94 billion. That figure was $711 million in BHGE’s case. Electronic Arts Inc. (NASDAQ:EA) is the most popular stock in this table. On the other hand Ford Motor Company (NYSE:F) is the least popular one with only 30 bullish hedge fund positions. Compared to these stocks Baker Hughes, a GE company (NYSE:BHGE) is even less popular than F. Considering that hedge funds aren’t fond of this stock in relation to other companies analyzed in this article, it may be a good idea to analyze it in detail and understand why the smart money isn’t behind this stock. This isn’t necessarily bad news. Although it is possible that hedge funds may think the stock is overpriced and view the stock as a short candidate, they may not be very familiar with the bullish thesis. In either case more research is warranted.