Let me tell you about a stock that serves as a prime example of what I call “short-term stupidity,” but has lots of things going for it. Without even considering the stock’s price, take a look at how revenue and earnings per share have grown since 2006. 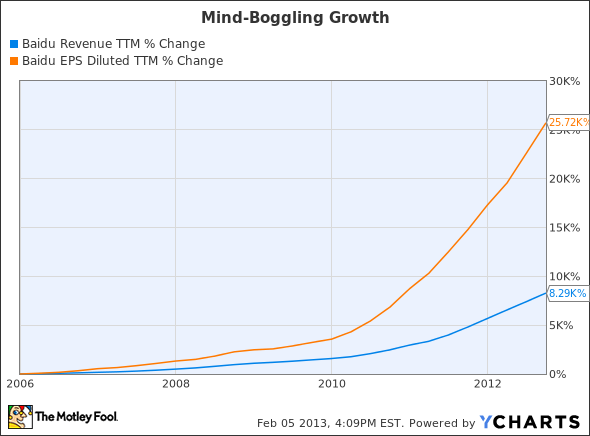 Clearly, though this type of growth can’t continue forever, the stock must be trading for sky-high valuations, right? Wrong. Instead, this stock now trades hands at just 20 times earnings and 20 times free cash flow. Yesterday, the company shed 10% of its value.

At the same time, analysts expect the company to grow earnings by 23% per year for the next three years, a number which is probably being low-balled, as it has beat analyst expectations in 15 consecutive  quarters.

What stock is it?
For those of you who didn’t read the chart above too carefully (darn YCharts for being so thorough!), the company I’m talking about is China’s largest search engine, Baidu.com, Inc. (NASDAQ:BIDU) .

Though the numbers above might be compelling enough to convince you that there’s a market mis-pricing taking place here, read below and I’ll offer up two more reasons that short-term investors are missing the bigger picture and creating a great buying opportunity for their long-term brethren.

As solid as can be, with lots of room to grow
Many people have compared Baidu to Google Inc (NASDAQ:GOOG) , as each company dominates its home market’s share of search queries. But dig a little deeper and you might see that Baidu has the potential to grow even more.

The big difference is that the technological revolution that has taken place in the U.S. over the past 20 years is just getting started in China. Just take a look at where Internet penetration stands in both countries. The difference, however, is that China is a much bigger country. And, believe it or not, Baidu has an 80% market share of search in China, while Google sits at a still-impressive 67%.

Think about it: an 80% Internet penetration in the U.S. with a 67% market share gives Google roughly 168 million regular users. If China had 80% Internet penetration and Baidu held its search market share around 75%, the company would have roughly 860 million regular users — or an audience of more than five times that of Google.