Avnet, Inc. (AVT): Are Hedge Funds Right About This Stock?

Is Avnet, Inc. (NASDAQ:AVT) a good bet right now? We like to analyze hedge fund sentiment before doing days of in-depth research. We do so because hedge funds and other elite investors have numerous Ivy league graduates, expert network advisers, and supply chain tipsters working or consulting for them. There is not a shortage of news stories covering failed hedge fund investments and it is a fact that hedge funds’ picks don’t beat the market 100% of the time, but their consensus picks have historically done very well and have outperformed the market after adjusting for risk.

Avnet, Inc. (NASDAQ:AVT) investors should be aware of an increase in hedge fund interest lately. AVT was in 23 hedge funds’ portfolios at the end of September. There were 16 hedge funds in our database with AVT holdings at the end of the previous quarter. Our calculations also showed that AVT isn’t among the 30 most popular stocks among hedge funds.

We’re going to take a look at the recent hedge fund action regarding Avnet, Inc. (NASDAQ:AVT).

How have hedgies been trading Avnet, Inc. (NASDAQ:AVT)?

Heading into the fourth quarter of 2018, a total of 23 of the hedge funds tracked by Insider Monkey were long this stock, a change of 44% from the previous quarter. Below, you can check out the change in hedge fund sentiment towards AVT over the last 13 quarters. So, let’s review which hedge funds were among the top holders of the stock and which hedge funds were making big moves. 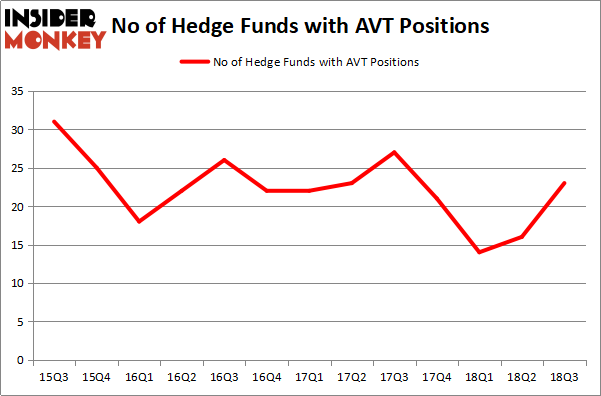 Among these funds, Pzena Investment Management held the most valuable stake in Avnet, Inc. (NASDAQ:AVT), which was worth $363.4 million at the end of the third quarter. On the second spot was AQR Capital Management which amassed $77.5 million worth of shares. Moreover, Atlantic Investment Management, Diamond Hill Capital, and Polaris Capital Management were also bullish on Avnet, Inc. (NASDAQ:AVT), allocating a large percentage of their portfolios to this stock.

As aggregate interest increased, key money managers were breaking ground themselves. Sensato Capital Management, managed by Ernest Chow and Jonathan Howe, initiated the most outsized position in Avnet, Inc. (NASDAQ:AVT). Sensato Capital Management had $12.5 million invested in the company at the end of the quarter. Joel Greenblatt’s Gotham Asset Management also made a $12.4 million investment in the stock during the quarter. The other funds with brand new AVT positions are Noam Gottesman’s GLG Partners, Jim Simons’s Renaissance Technologies, and Andrew Feldstein and Stephen Siderow’s Blue Mountain Capital.

Let’s now take a look at hedge fund activity in other stocks – not necessarily in the same industry as Avnet, Inc. (NASDAQ:AVT) but similarly valued. We will take a look at Compania Cervecerias Unidas S.A. (NYSE:CCU), Penumbra Inc (NYSE:PEN), Ultrapar Participacoes SA (NYSE:UGP), and Chemed Corporation (NYSE:CHE). This group of stocks’ market caps are similar to AVT’s market cap.

As you can see these stocks had an average of 17.5 hedge funds with bullish positions and the average amount invested in these stocks was $229 million. That figure was $803 million in AVT’s case. Penumbra Inc (NYSE:PEN) is the most popular stock in this table. On the other hand Ultrapar Participacoes SA (NYSE:UGP) is the least popular one with only 8 bullish hedge fund positions. Avnet, Inc. (NASDAQ:AVT) is not the most popular stock in this group but hedge fund interest is still above average. This is a slightly positive signal but we’d rather spend our time researching stocks that hedge funds are piling on. In this regard PEN might be a better candidate to consider a long position.