Avis Budget Group Inc. (NASDAQ:CAR) was in 29 hedge funds’ portfolios at the end of September. CAR investors should pay attention to an increase in hedge fund interest lately. There were 27 hedge funds in our database with CAR positions at the end of the previous quarter. Our calculations also showed that CAR isn’t among the 30 most popular stocks among hedge funds.

At the end of the third quarter, a total of 29 of the hedge funds tracked by Insider Monkey were long this stock, a change of 7% from one quarter earlier. On the other hand, there were a total of 23 hedge funds with a bullish position in CAR at the beginning of this year. With the smart money’s sentiment swirling, there exists a select group of notable hedge fund managers who were adding to their holdings considerably (or already accumulated large positions). 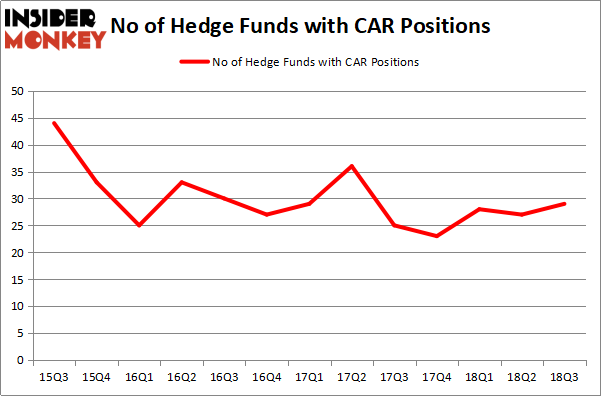 When looking at the institutional investors followed by Insider Monkey, Karthik Sarma’s SRS Investment Management has the largest position in Avis Budget Group Inc. (NASDAQ:CAR), worth close to $385.7 million, amounting to 8% of its total 13F portfolio. Coming in second is Larry Robbins of Glenview Capital, with a $139.4 million position; 0.9% of its 13F portfolio is allocated to the company. Other peers that hold long positions comprise Richard S. Pzena’s Pzena Investment Management, Ric Dillon’s Diamond Hill Capital and Steven Boyd’s Armistice Capital.

As one would reasonably expect, specific money managers were breaking ground themselves. Armistice Capital, managed by Steven Boyd, assembled the largest position in Avis Budget Group Inc. (NASDAQ:CAR). Armistice Capital had $32.1 million invested in the company at the end of the quarter. Anand Parekh’s Alyeska Investment Group also initiated a $5.2 million position during the quarter. The other funds with new positions in the stock are Dmitry Balyasny’s Balyasny Asset Management, Phill Gross and Robert Atchinson’s Adage Capital Management, and Michael Platt and William Reeves’s BlueCrest Capital Mgmt..

View table here if you experience formatting issues.
As you can see these stocks had an average of 14.75 hedge funds with bullish positions and the average amount invested in these stocks was $198.88 billion. That figure was $810 million in CAR’s case. Five9 Inc (NASDAQ:FIVN) is the most popular stock in this table. On the other hand Liberty Oilfield Services Inc. (NYSE:LBRT) is the least popular one with only 8 bullish hedge fund positions. Compared to these stocks Avis Budget Group Inc. (NASDAQ:CAR) is more popular among hedge funds. Considering that hedge funds are fond of this stock in relation to its market cap peers, it may be a good idea to analyze it in detail and potentially include it in your portfolio.