AutoZone, Inc. (NYSE:AZO) is the leading specialty retailer of automotive parts and accessories, with about 5,000 stores throughout the United States and Mexico and about a 19.6% market share.  Investors in AutoZone have done very well; thanks to steadily increasing revenues (see below), better margins, and one of the best share repurchase programs I have seen in the entire market.

AutoZone actually flourished during the latest recession, as drivers tended to hang onto older cars and repair them, rather than buy new ones.  With the economy improving, what will that mean for AutoZone?  Will they continue to grow, or will the growth taper off with increasing sales of new vehicles?  When the company reports earnings on Tuesday the 26th, investors may get a new glimpse into the direction of the company.

AutoZone focuses primarily on do-it-yourself customers, selling new and remanufactured automotive parts, maintenance items, protectants, and accessories for most foreign and domestic cars and trucks.  The company also has a significant online presence with autozone.com, which also features diagnostic and repair information.

Its two closest direct competitors are O’Reilly Automotive Inc (NASDAQ:ORLY) which operates 3,740 stores in 39 states, and Advance Auto Parts, Inc. (NYSE:AAP) with its 3,600 stores in 39 states.  Although I don’t think either of these are a huge threat to AutoZone, they are worth monitoring in terms of valuation, for comparison purposes.  While all three of the companies mentioned are growing, with O’Reilly actually growing the fastest (see below), I think this has more to do with a general uptrend in the industry and O’Reilly capitalizing on underserved markets than it has to do with either company taking AutoZone’s market share.  Advance Auto Parts’ strategy seems to be oriented more towards running its current operations as efficiently as possible and less towards aggressively increasing the number of stores.  However, when looking at the revenue growths in the chart below, bear in mind that as an investment you have to consider a stock’s valuation relative to its growth rate.  More on that later… 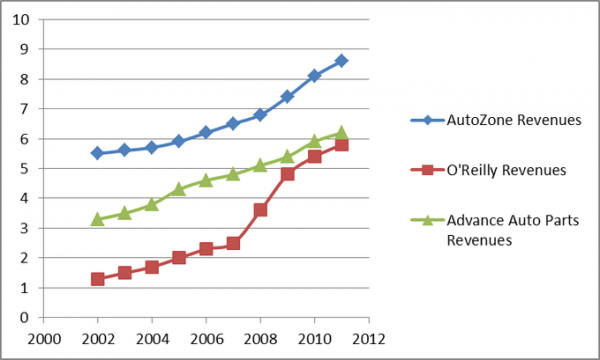 Another threat to AutoZone and its peers is discount giants such as Wal-Mart Stores, Inc. (NYSE:WMT), who has operated an auto department for years.  Stores like Wal-Mart have two big competitive advantages over AutoZone in that people like one-stop shopping and they generally operate at lower profit margins and can undercut specialty retailers.  I have bought equipment to change my oil and wash my car at Wal-Mart several times simply because I was already there buying other things.

Companies like Wal-Mart also make for more diversified ways to gain exposure to a sector.  If you believe (as I do) that the economy has significantly improved and spending will increase for several more years, you definitely need retail in your portfolio.  If you don’t want the added risks of specialty retailers, a giant that sells everything like Wal-Mart may be the way to go.

As far as AutoZone goes, I think they are very fairly valued, especially considering their growth prospects and very shareholder-friendly track record.  AutoZone does not pay a dividend, which will be a turn-off to some investors; however they more than make up for it with their incredible buybacks.  Since 2009, the number of outstanding shares of AutoZone has decreased from 56.0 million to 36.3 million, a staggering 35% reduction in just four years.

Are Wal-Mart Stores, Inc. (WMT) Sales The Canary in the Coal Mine?