The firm is of the opinion that tepid sales of new vehicles during the recession has led to an increase in the average age, and the number of vehicles more than 12 years old on the road is growing at a fast pace. After taking a look at this piece of data, one shouldn’t be surprised at the terrific performance of aftermarket retailers this year, especially O’Reilly Automotive Inc (NASDAQ:ORLY).

When stacked up against peers Advance Auto Parts, Inc. (NYSE:AAP) and AutoZone, Inc. (NYSE:AZO), O’Reilly has delivered the best price appreciation so far this year, and the trend looks set to continue as the company continues to execute on its strategies. 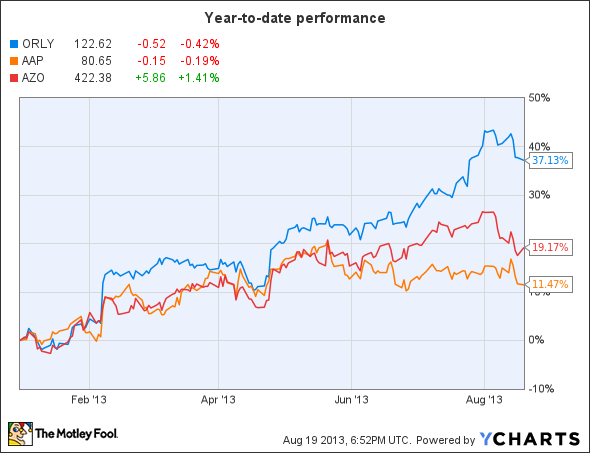 This massive outperformance when compared to its peers doesn’t come as a surprise when O’Reilly Automotive Inc (NASDAQ:ORLY)’s revenue growth is compared to theirs. 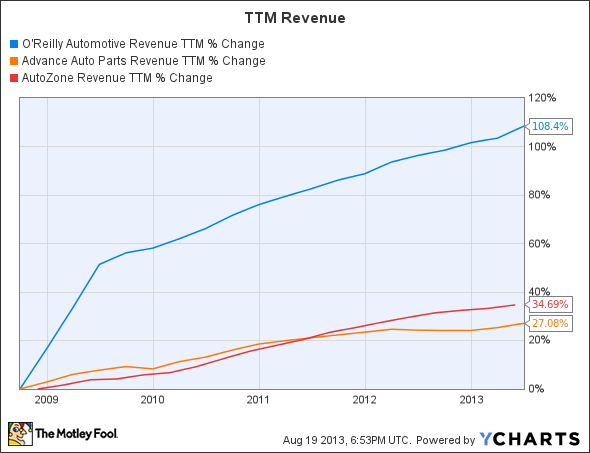 Solid yet again
In the recently reported second quarter as well, O’Reilly Automotive Inc (NASDAQ:ORLY)’s revenue grew almost 10% from the year-ago period to $1.71 billion, surpassing the $1.70 billion consensus. Same-store sales growth in the quarter was very impressive. O’Reilly exceeded its own target of 4% to 6% by clocking same-store sales growth of 6.5%, way better than the 2.5% it witnessed last year.

Earnings growth was even more spectacular, as earnings per share shot up 37% to $1.58, comfortably ahead of the $1.49 consensus estimate. O’Reilly’s efforts at increasing its margins by way of selling more high-margin items seem to be bearing fruit.

Looking ahead, O’Reilly is looking to benefit from the higher average age of vehicles on the road. Management believes that the complexity of vehicles, the higher costs of parts, and the longer average vehicle life due to better engineering will be tailwinds going forward. In addition, O’Reilly Automotive Inc (NASDAQ:ORLY) is of the opinion that consumers have some good reasons to keep their older vehicles running.

With unemployment rates still being a concern, O’Reilly is of the opinion that consumers are still facing short-term economic uncertainty. So, consumers might still be keen on keeping their older vehicles running, and this would require maintenance, which bodes well for O’Reilly. With more than 4,000 stores, O’Reilly looks well-positioned to benefit from this trend of maintaining older vehicles for long periods of time.

Strategies to watch
The company has initiated a loyalty program to further boost sales as it looks to capture more do-it-yourself customers, by way of targeted promotions and accumulating purchasing history of consumers. O’Reilly has received positive feedback regarding its loyalty program in the pilot phase and plans to implement it across its chain by the end of the fiscal year.

To expand its presence further, O’Reilly acquired VIP Parts, Tires & Service’s parts business last year, adding 56 stores to its portfolio in Maine, New Hampshire, and Massachusetts. Although O’Reilly doesn’t expect immediate accretion from this acquisition, the company aims to expand its footprints in these markets, and VIP’s acquisition provides it with a point of entry.