AutoNation, Inc. (AN) Hedge Funds Are Snapping Up

How do you pick the next stock to invest in? One way would be to spend hours of research browsing through thousands of publicly traded companies. However, an easier way is to look at the stocks that smart money investors are collectively bullish on. Hedge funds and other institutional investors usually invest large amounts of capital and have to conduct due diligence while choosing their next pick. They don’t always get it right, but, on average, their stock picks historically generated strong returns after adjusting for known risk factors. With this in mind, let’s take a look at the recent hedge fund activity surrounding AutoNation, Inc. (NYSE:AN).

Is AutoNation, Inc. (NYSE:AN) an outstanding investment now? The smart money is taking a bullish view. The number of bullish hedge fund bets increased by 1 recently. Our calculations also showed that AN isn’t among the 30 most popular stocks among hedge funds. AN was in 24 hedge funds’ portfolios at the end of the third quarter of 2018. There were 23 hedge funds in our database with AN positions at the end of the previous quarter.

What does the smart money think about AutoNation, Inc. (NYSE:AN)? 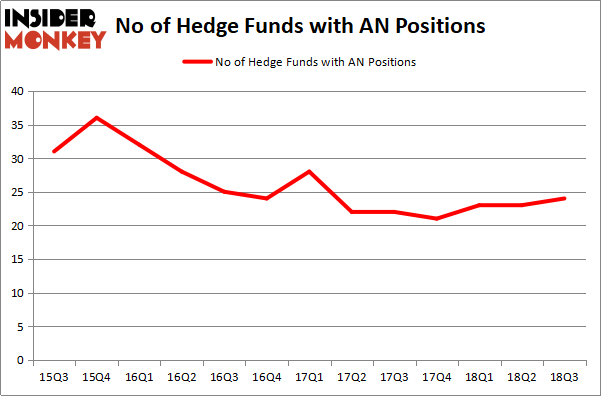 More specifically, ESL Investments was the largest shareholder of AutoNation, Inc. (NYSE:AN), with a stake worth $150.1 million reported as of the end of September. Trailing ESL Investments was Bill & Melinda Gates Foundation Trust, which amassed a stake valued at $78.9 million. Arlington Value Capital, GAMCO Investors, and Water Street Capital were also very fond of the stock, giving the stock large weights in their portfolios.

With a general bullishness amongst the heavyweights, key hedge funds have jumped into AutoNation, Inc. (NYSE:AN) headfirst. Renaissance Technologies, managed by Jim Simons, created the biggest position in AutoNation, Inc. (NYSE:AN). Renaissance Technologies had $1.5 million invested in the company at the end of the quarter. Brandon Haley’s Holocene Advisors also made a $0.7 million investment in the stock during the quarter. The other funds with brand new AN positions are Bruce Kovner’s Caxton Associates LP, George Hall’s Clinton Group, and David Costen Haley’s HBK Investments.

As you can see these stocks had an average of 14.75 hedge funds with bullish positions and the average amount invested in these stocks was $179 million. That figure was $430 million in AN’s case. BankUnited, Inc. (NYSE:BKU) is the most popular stock in this table. On the other hand Valley National Bancorp (NASDAQ:VLY) is the least popular one with only 8 bullish hedge fund positions. AutoNation, Inc. (NYSE:AN) is not the most popular stock in this group but hedge fund interest is still above average. This is a slightly positive signal but we’d rather spend our time researching stocks that hedge funds are piling on. In this regard BKU might be a better candidate to consider a long position.