Do you like companies that pay generous dividends? How about firms with high barriers of entry that enjoy enormous pricing power and operate in a duopolistic industry? If you answered yes to one or all of the above, AT&T Inc. (NYSE:T) could be a perfect fit for your portfolio.

AT&T Inc. (NYSE:T) and competitor, Verizon Communications Inc. (NYSE:VZ), share around 65% of the market share for mobile subscribers in the United States.  This dominance allows both firms to enjoy enormous pricing power because, let’s face it, people will pay up before they will give up their smartphones and internet connections. This makes these two telecom giants nearly recession-proof as well.

AT&T Inc. (NYSE:T)’s 5% dividend yield easily beats out Verizon Communications Inc. (NYSE:VZ)’s yield of a little over 4%. These dividends have been increasing for decades, including through the Great Recession, and are supported by large amounts of free cash flow. 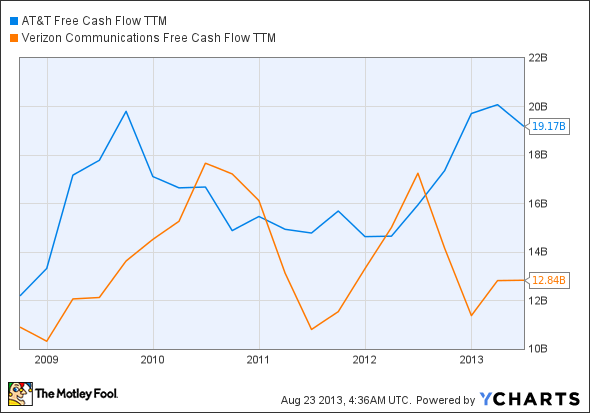 What’s up with all that debt?

The telecommunications industry is capital-intensive, especially when in the middle of rolling-out the next generation wireless 4G LTE network, which costs a pretty penny in the short-term, but leads to more customers down the road. The newest 4G technology can be up to ten times as fast as the old 3G wireless technology, which is why AT&T Inc. (NYSE:T) and Verizon Communications Inc. (NYSE:VZ) are aggressively expanding it nationwide.

AT&T’s debt load of around $76 billion, compared to only $4.55 billion in cash, is likely due to heavy investment into the future, and expenditures should inevitably die down. The company’s ability to generate billions of free cash flow also give it more maneuverability. Verizon Communications Inc. (NYSE:VZ) carries almost $50 billion in debt, with $2.41 billion in cash on the books, so AT&T Inc. (NYSE:T) isn’t racking up debt all by itself either.

Debt is a necessary evil for companies constantly needing to reinvest in upgrading their networks. While AT&T is rapidly expanding its 4G LTE network, which covers more than 225 million people in 370 markets, it still lags behind Verizon Communications Inc. (NYSE:VZ), which covers over 500 markets and engulfs nearly 95% of the U.S. population.  Verizon has nearly finished its roll-out, however, and AT&T has plans to eventually match the size and scope of its competitor.

Who would have thought that Google Inc (NASDAQ:GOOG) would, once again, disrupt the old way of doing things? Google Fiber, one of the Mountainview giant’s new pet projects, is an affordable, fast, and free internet service. In the short-term, AT&T and Verizon may not be very concerned, considering it would cost Google an estimated $140 billion to cover the entire nation with its own service.  Long-term, however, things could be different.

For instance, after allowing AT&T to provide its in-house, free Wi-Fi since 2009, Starbucks has had a change of heart, deciding to get more cozy with Google Inc (NASDAQ:GOOG). Google will now step in front of AT&T for the opportunity to build out the fast-growing Starbucks network in the future. Over the next 18 months, Google will be upgrading over 7,000 Starbucks locations in the U.S.  That’s a big loss for AT&T, and could result in a troubling longer-term issue if Google continues to steal customers.