Two years ago, wireless carriers tightened their upgrade policies across the board, while also implementing upgrade fees to partially offset subsidy expenses. That trend is happening again this year, which could very well come at Apple Inc. (NASDAQ:AAPL)‘s expense.

In April, No. 1 carrier Verizon Communications Inc. (NYSE:VZ) Wireless announced that it was tightening its upgrade policy, increasing the timeframe from 20 months to 24 months, to “align the upgrade date with the contract end date,” as if that’s a good thing for consumers. Big Red has been aggressively seeking to rein in subsidy expenses, in part by promoting platform competition.

AT&T Inc. (NYSE:T) has just announced that it is following in Big Red’s footsteps, similarly extending the amount of time that consumers have to wait before they can buy shiny new smartphones, which will now be a full 24 months. That will also “align” upgrade dates with contract end dates, and the changes will impact Ma Bell customers whose contracts expire in March 2014 or later. 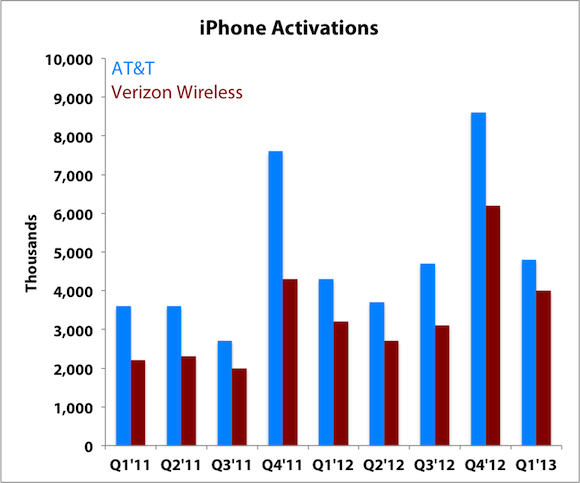 Even though Verizon Communications Inc. (NYSE:VZ) is larger than AT&T Inc. (NYSE:T), Ma Bell still sells more iPhones than Big Red. Verizon has been selling a lot of older models, in part by fulfilling pent-up demand at lower price points once the iPhone 4 moved to free on contract. Still, the iPhone was over half of all smartphones sold on Verizon Communications Inc. (NYSE:VZ) Wireless last quarter.

Now the two largest domestic carriers have tightened their upgrade policies, which are both incrementally negative developments for Apple Inc. (NASDAQ:AAPL). The Mac maker has the strongest installed base in the U.S., with COMSCORE, Inc. (NASDAQ:SCOR)‘s latest estimates putting Apple’s 39.2% well ahead of Samsung’s 22%. One saving grace may be that iOS users tend to be more loyal — they’ll just have to wait longer now.

How to Handle the FBI and Google Inc (GOOG)

Apple Inc. (AAPL): The Scoop About The New Music Stream