It seems that lately, the Dow Jones Industrial Average hits record high after record high. That has a lot of people wondering if we’re entering bubble territory. While trying to time the market is always a bad idea, investors should be checking to see if the stocks they’re buying are too expensive right now.

A great metric to help investors see whether a stock is expensive is its price-to-earnings ratio. This tells you how much a stock is worth, relative to how much money its company made over the past year. Right now, the average Dow stock trades for a P/E of 16.7.

For comparison’s sake, the Dow’s five most expensive stocks — all listed below — have P/Es well above this average. But as you’ll see, that doesn’t necessarily mean they should be avoided at all costs.

5. The Home Depot, Inc. (NYSE:HD), P/E of 26
After a painful Great Recession for Home Depot, people are finally starting to build and refurbish their own homes. That has been a huge boon for the company.

Even as late as mid-2011, The Home Depot, Inc. (NYSE:HD) traded hands at a P/E of just 14. Since then, the stock has shot up 160%. Clearly, people are excited to see housing making a comeback. But there’s a problem with where the stock’s growth came from. 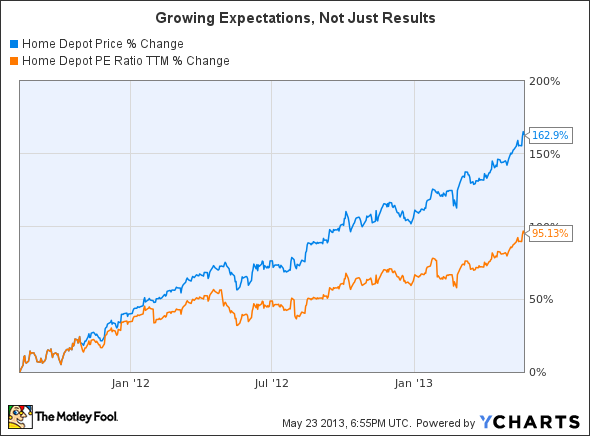 Well over half of Home Depot’s growth is from heightened expectations — not actual results. The Home Depot, Inc. (NYSE:HD)’s certainly not a bad stock, but at today’s prices, it may be better to wait for a pullback before buying in.

4. AT&T Inc. (NYSE:T), P/E of 28
Telecom companies can have weird P/Es. That’s because things like depreciation of the company’s physical assets and amortization play a pretty large role in its earnings. The problem is, these calculations don’t actually take real money exchanging hands into consideration. They are purely abstract.

A much better way to see whether AT&T Inc. (NYSE:T) is expensive is to look at its price-to-free-cash-flow ratio. This measures the price of the stock with how much money it actually kept from the previous year. Currently, AT&T has a P/FCF of just 9.9. That’s much more reasonable.

When you consider this, along with the company’s 4.8% dividend and the fact that wireless subscribers have increased by 39% since 2008, AT&T Inc. (NYSE:T) looks like a pretty solid bet for your money.

The most important thing to understand about the company is that it’s in a highly cyclical industry. It seems that during this business cycle, the downturn is understandably longer than normal. But it won’t always be this way: Analysts generally see the company growing earnings markedly over the next four years. In fact, Alcoa is expected to grow earnings per share by 46% per year up to 2016.

If that turns out to be true, Alcoa might actually be cheap right now. But it will be important to monitor demand from China, where demand for aluminum has slumped and inventories are piling up.

2. Bank of America Corp (NYSE:BAC), P/E of 42
Bank of America’s $13 stock is far from its 2006 highs in the mid-$50s, but shares are up 340% since bottoming out in 2009. Though the company might look expensive with a P/E of 42, analysts expect earnings to grow by 53% per year over the next four years. As with Alcoa, this would actually make the stock seem cheap today if things pan out as expected.

But that is a mighty huge if. Investing with banks, especially “too big to fail” banks, can be hazardous to your portfolio. Only invest in the bank for which you have a handle on all of the complicated ways in which it tries to make money. Keep in mind that the CEOs of some of these banks don’t even have a firm grasp on what’s going on all the time.

1. Verizon Communications Inc. (NYSE:VZ), P/E of 130
Remember how P/E wasn’t the greatest measure to judge AT&T Inc. (NYSE:T)? Well, the same holds true with Verizon. Instead, we can look at the company’s P/FCF, which is just 8.8. That makes the company look a whole lot cheaper.

Throw in the fact that Verizon offers a nice 3.9% dividend, and you can see why this telecom might be a much better buy than some people might initially think.

The article The Dow’s 5 Most Expensive Stocks originally appeared on Fool.com.