After a slow start to the day, the record-setting Dow Jones Industrial Average hasn’t been stopped from rising even higher, despite misgivings from wary investors over its year-to-date surge. As of 2:15 p.m. EDT, the blue chip index has pulled in gains of 20 points, or around 0.1%. Most stocks are in the green today, helped by falling jobless claims reported by the Labor Department. Let’s catch up on the stories and movers you need to know.

Mixed reactions around the market
AT&T Inc. (NYSE:T) hasn’t been able to take advantage of the Dow’s record gains today, and the telecom stock has weighed down the index from even bigger gains. Shares have fallen more than 1% to rank among the top Dow laggards even after the company announced the launch of a no-contract, prepaid wireless service today, called Aio Wireless.

Aio looks to follow in the steps of competitor services targeting customers who aren’t interested in traditional two-year phone contracts. 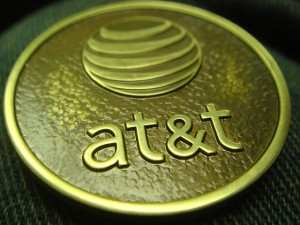 While AT&T Inc. (NYSE:T) won’t offer LTE with the Aio plans, it does offer unlimited data, talk, and text at a price range of $40 to $70. With AT&T’s contract memberships growing at a slower rate than competitors such as Verizon Communications Inc. (NYSE:VZ), the firm’s willingness to expand beyond traditional contract boundaries is a good move to capture new customers.

Most stocks are performing better on the Dow today, and The Walt Disney Company (NYSE:DIS) ranks as one of the day’s leaders. Shares of the entertainment giant have risen 1.6% today after Disney’s Marvel scored the second-biggest domestic opening weekend in film history with Iron Man 3 this past weekend. The superhero film has already captured more than $680 million in revenue, and Disney’s not done there.

The company released plans today to launch an animated Marvel film, Big Hero 6, to be released in 2014. With all the success the Marvel brand has scored, it’s only right for The Walt Disney Company (NYSE:DIS) to capitalize on its success — particularly in its roots of animation, where it hasn’t filmed a comic source before.

The Boeing Company (NYSE:BA) shares are also on the rise today, gaining 0.6%. The company announced that it will pick up the pace of 787 Dreamliner manufacturing as its grounding drama that has dominated this year comes to a close. Japan’s All Nippon Airways announced that it will return its 787 fleet to service beginning in June, marking a confident step forward for the 787 from its largest active carrier. United Airlines also intends to begin flying its Dreamliners soon, and The Boeing Company (NYSE:BA)’s outlook with the jets is strong: The company still has more than 800 unfilled orders in its backlog and intends to increase production to 10 jets a month by the end of the year.