This article will discuss AT&T Inc. (NYSE:T) and Verizon Communications Inc. (NYSE:VZ), and why I think these are great companies to own.  For the long-term, my investment strategy is to hold and own great companies that have strong businesses, and that pay solid, dependable dividends.

AT&T has increased its dividend for 28 consecutive years through 2012.  It currently has a dividend yield of 5.1%, which offers a nice premium to treasury yields and most bonds.  Verizon has followed suit with dividend increases since it was spun off from the original AT&T Inc. (NYSE:T) in the early 1980s.

Following is a five-year percentage change price chart in comparison to the S&P 500 for the same time period. 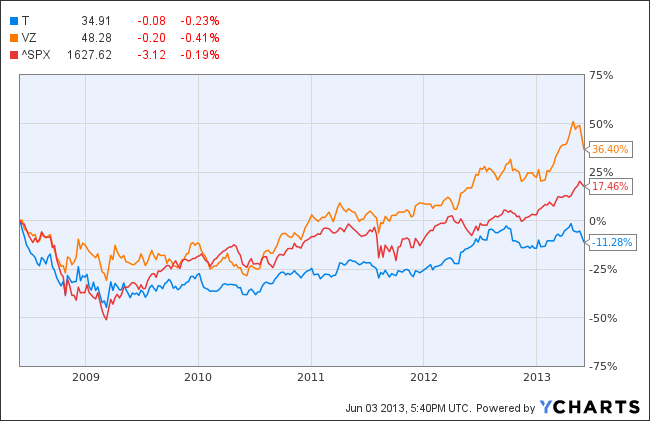 Over the past five years, Verizon has outperformed the S&P 500, while AT&T has lagged.  After adding in dividends, it significantly adds to the return for these two stocks.  This underperformance by AT&T Inc. (NYSE:T) is short-term, in my opinion, and I believe that shareholders who own the stock for many years will still be rewarded, regardless of their share price entry point.

When the 2008-2009 economic crisis hit, these were great stocks to own.  The share prices did go down quite a bit, but these have proven to be great entry points.  If you bought shares when the price went down, you would have a significant gain right now.  Furthermore, the dividends were maintained and still increased in these times.  Long-term shareholders did not have to do anything but hold the shares and everything has turned out alright.  This is an important factor to me when considering a stock to add to my portfolio.

U-verse is a fast-growing segment for AT&T Inc. (NYSE:T).  High-speed internet and consumer VOIP connections grew in the first quarter of 2013 by 42.2% and 27.8%, respectively, compared to the first quarter of 2012.  There were 8.7 million total subscribers to this service as of March 31, 2013, and plans are in the works to expand this service to 8.5 million additional customer locations.

This video service represents an exciting opportunity for AT&T shareholders.  In the future, if it continues to grow, it could be a business that AT&T can spin off.  TV service is a great market, and with AT&T’s expertise in advertising and managing businesses, it is poised for future success, in my opinion.

Currently, Verizon Wireless is a joint venture between Verizon Communications Inc. (NYSE:VZ) and Vodafone Group Plc (ADR) (NASDAQ:VOD).  There have been many rumors and statements made that indicate that it is very likely that Verizon will be acquiring this business.  Based on information from Verizon’s most recent 10-Q for the first quarter of 2013, this business grew by 6.8% compared to the quarter ending in March 2012.  Its service revenue grew by 8.6% in this time period.  This wireless business is the best in the world.

Verizon Communications Inc. (NYSE:VZ) has the ability to purchase this entire business, based on its financial position and the ability to swap shares to make it happen.  If this happens, the company has the prospect of spinning it off as a new company in the future if it proves to be value-added to investors.  Furthermore, its wireline business has significant areas of strength, based on its 10-Q, with mass markets experiencing 3.3% year-over-year growth.  The company’s future decisions as to which will become its core business areas will play a large role in determining if any non-core assets could be sold or spun off as a new company.