Insider Monkey has processed numerous 13F filings of hedge funds and famous investors to create an extensive database of hedge fund holdings. The 13F filings show the hedge funds and investors’ positions as of the end of the third quarter. You can find write-ups about an individual hedge fund’s trades on numerous financial news websites. However, in this article, we will take a look at their collective moves and analyze what the smart money thinks of Associated Capital Group, Inc. (NYSE:AC) based on that data.

Hedge fund interest in Associated Capital Group, Inc. (NYSE:AC) shares was flat at the end of last quarter. This is usually a negative indicator. Our calculations show that the company was not one of the 30 most popular stocks among hedge funds. The level and the change in hedge fund popularity aren’t the only variables you need to analyze to decipher hedge funds’ perspectives. A stock may witness a boost in popularity but it may still be less popular than similarly priced stocks. That’s why at the end of this article we will examine companies such as MTS Systems Corporation (NASDAQ:MTSC), and to gather more data points.

In the financial world, there are a large number of tools investors have at their disposal to grade stocks. A pair of the most under-the-radar tools are hedge fund and insider trading indicators. We have shown that, historically, those who follow the top picks of the best fund managers can outperform the broader indices by a solid amount. Insider Monkey’s flagship best performing hedge funds strategy returned 17.4% year to date and outperformed the market by more than 14 percentage points this year. This strategy also outperformed the market by 3 percentage points in the fourth quarter despite the market volatility (see the details here). That’s why we believe hedge fund sentiment is a useful indicator that investors should pay attention to.

“Associated Capital was spun off from GAMCO Investors, Inc. in late 2015, separating the institutional research and alternative investment businesses from the traditional investment management business. Associated Capital has two lines of business: institutional research and alternative investments, the former a low-growth, mature business, while the latter is a potentially high-growth operation.

The alternative investments business manages just $1.4 billion of client assets in merger arbitrage and event-driven value strategies. Its challenge has been many years of exceedingly low interest rates, a consequence of which is narrow price spreads between companies that are parties to a pending merger. Accordingly, merger arbitrage, which is a low-volatility investment strategy, has been producing low returns. Nevertheless, the AUM are growing: AUM has increased by almost 30% since the spin-off, and has the potential to expand more rapidly should merger arbitrage spreads widen. This optionality takes multiple forms: wider spreads; more deals to which capital is allocated, and more AUM raised for that purpose. In success more, this would lead to higher earnings (potentially amplified if incentive fees are earned), and higher valuation multiples. In that sense, Associated Capital is a diversifying element in a portfolio in that its operations and valuation could improve in response to higher short-term interest rates.” 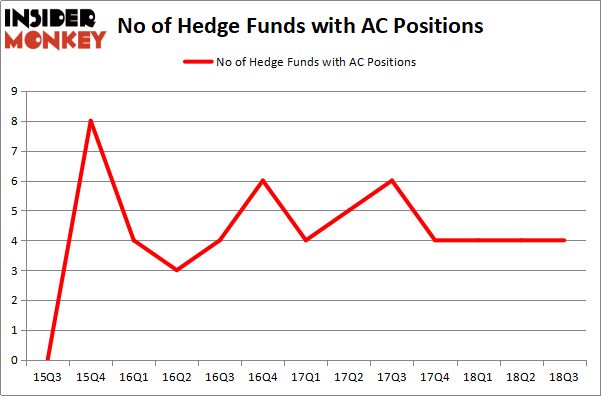 Of the funds tracked by Insider Monkey, Murray Stahl’s Horizon Asset Management has the biggest position in Associated Capital Group, Inc. (NYSE:AC), worth close to $63.2 million, corresponding to 1.5% of its total 13F portfolio. The second largest stake is held by Chuck Royce of Royce & Associates, with a $8.6 million position; the fund has 0.1% of its 13F portfolio invested in the stock. Other peers that are bullish contain Jim Simons’s Renaissance Technologies, Frederick DiSanto’s Ancora Advisors and .

As you can see these stocks had an average of 11.25 hedge funds with bullish positions and the average amount invested in these stocks was $257 million. That figure was $73 million in AC’s case. 0 is the most popular stock in this table. On the other hand 0 is the least popular one with only 1 bullish hedge fund positions. Associated Capital Group, Inc. (NYSE:AC) is not the least popular stock in this group but hedge fund interest is still below average. This is a slightly negative signal and we’d rather spend our time researching stocks that hedge funds are piling on. In this regard RCKT might be a better candidate to consider a long position.