Arena Pharmaceuticals, Inc. (NASDAQ:ARNA) issued a press release pointing out that its marketing partner Eisai had started direct-to-consumer advertising for their obesity drug Belviq, including a full-page advertisement in O, The Oprah Magazine.

You read that right: a press release about an advertisement.

It’s a sure sign that Arena Pharmaceuticals, Inc. (NASDAQ:ARNA) knows its investors are a little worried about the launch. Management needn’t look further than Arena’s stock price to see. 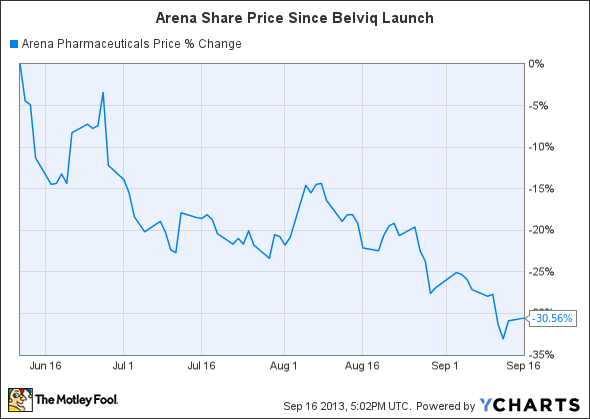 I’m not surprised by the slow launch, but Arena Pharmaceuticals, Inc. (NASDAQ:ARNA)’s share price decline is surprising. Investors must have had a higher expectation of the launch than I did. It seemed pretty obvious after VIVUS, Inc. (NASDAQ:VVUS)‘s slow start launching its obesity drug, Qsymia, that Belviq wouldn’t be an instant blockbuster.

Sure, Arena Pharmaceuticals, Inc. (NASDAQ:ARNA) had a few things going for it. Belviq was available in drugstores on day one of the launch; Qsymia was initially available only through mail-order pharmacies. Belviq has fairly mild side effects, while there’s a risk of birth defects with Qsymia, which is governed by a REMS. And Arena has a Big Pharma marketing partner, while VIVUS, Inc. (NASDAQ:VVUS) launched alone.

Unfortunately, none of those issues are the main reason Qsymia’s launch was so slow. The bigger issue is that doctors are fundamentally uninterested in treating obesity with drugs and patients don’t want to pay for the drugs out of pocket.

Both issues are fixable. Doctors will become less worried about the risk-benefit of using drugs the longer they’re on the market, and Eisai and VIVUS, Inc. (NASDAQ:VVUS) are making progress getting the drugs covered by insurance, although there’s still a long ways to go.