Arena Pharmaceuticals, Inc. (NASDAQ:ARNA) shares fell after the company announced the June 11 U.S. release of its obesity drug BELVIQ — but that’s not necessarily a bad thing. Over the previous week, investors had bid the drugmaker’s shares above $9 in anticipation of the news; when it came, they sold. But with BELVIQ headed to shelves soon, there are a number of reasons why investors still expect good things for the drug company.

The U.S. launch of BELVIQ triggered a $65 million payment to Arena Pharmaceuticals, Inc. (NASDAQ:ARNA) from its partner, Eisai. Arena may also earn $1.19 billion in purchase price adjustments, depending on yearly sales levels for BELVIQ. Comparing Arena Pharmaceuticals, Inc. (NASDAQ:ARNA)’s $1.89 billion market capitalization to that payment illustrates how inexpensive Arena’s shares are relative to future sales. If the billion dollar sales level is reached, Arena would be worth just 1.5 times sales. Established pharmaceutical companies like Merk and Pfizer have a price-to-sales ratio of 3.

VIVUS, Inc. (NASDAQ:VVUS) beat Arena to market with its own obesity drug, Qsymia. But shares bottomed at around $10 in March as disappointment in weak sales, high promotional costs and operational inefficiencies were revealed.

After recovering steadily, management issued $200 million in convertible senior unsecured 7-year notes. Purchasers may also buy $30 million more. The funds will be used for a capped call transaction, which reduces shareholder dilution, and the rest used for drug development and commercialization. 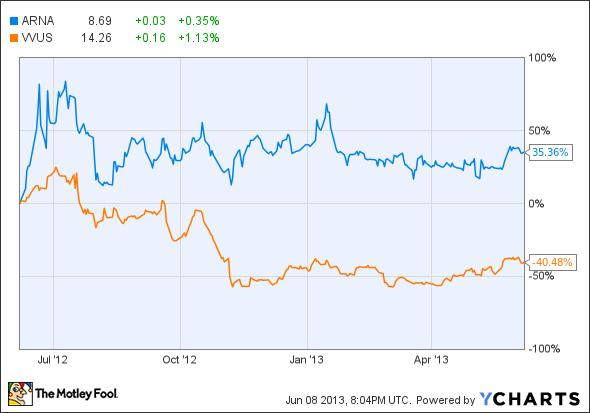 Arena does not want patients who lose less than 5% in weight within 12 weeks to continue treatment with BELVIQ. This may be viewed as a negative for sales, but the company wants reimbursement to be given only to those who receive a benefit. Initial sales may slow after 12 weeks, but in the long run, motivated patients will remain in treatment.

If BELVIQ were its only drug, then Arena Pharmaceuticals, Inc. (NASDAQ:ARNA) would not be a good investment. But the company’s also developing several other promising compounds.

Sarissa’s Stake in Vivus, Inc. (VVUS) Points to Renewed Interest in the...

Arena Pharmaceuticals, Inc. (ARNA): The Short Data You Need To SeeSantarus, Inc. (SNTS): Insiders Are Buying, Should You?