Are You Cuckoo to Invest In Lululemon Athletica inc. (LULU)?

Lululemon Athletica inc. (NASDAQ:LULU) CEO Christine Day announced that she will step down from her position for personal reasons. Since the news broke on June 10, the stock has suffered. Below is a one-month chart demonstrating this poor performance compared to peers NIKE, Inc. (NYSE:NKE) and Under Armour Inc (NYSE:UA). 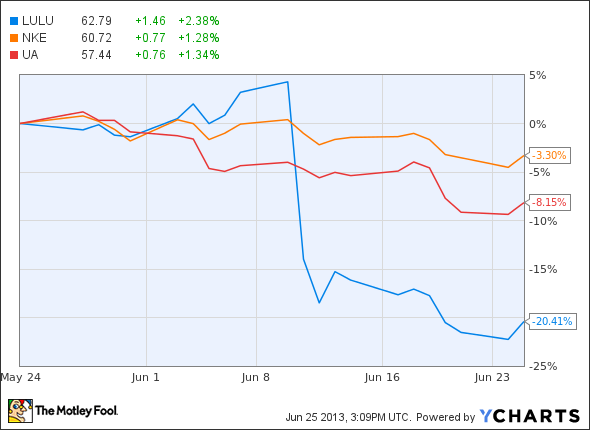 Day plans to stick around until a suitable replacement is found, but it’s not likely that the company will find someone who can lead the company as well she has for the past six years. Under Day’s leadership, Lululemon Athletica inc. (NASDAQ:LULU) has consistently improved its annual revenue and earnings.

Day’s announcement also came with speculation of insider trading by Chairman Dennis Wilson, who sold 2.3 million shares two days prior to the announcement. After details of the trade were released, it appears as though he’s clear from any wrongdoing. But his move still led to negative press, which hurt the stock price.

Also in the first quarter, Lululemon opened eight new stores and only closed one. The opening and closing of stores is important information for investors. It often indicates the confidence a company has in its future potential. If a retailer is opening more stores than its closing, then that company is likely confident in its future prospects. This, in turn, provides a quality hint to investors.

One of Lululemon’s goals is to open men’s-only stores by 2016.  Lululemon attempting to make a significant impact on the menswear market is like a classy Italian restaurant trying to sell hamburgers. Lululemon Athletica inc. (NASDAQ:LULU)’s brand is well established, and the word ‘Lululemon’ has a strong female connotation. Most men don’t want to wear a female brand, even if it’s the most comfortable fabric in the world. This severely limits Lululemon’s growth potential.