Are These 5 Dividends Ready to Crumble?: Atlantic Power Corp (AT), Exelon Corporation (EXC)

Dividends are like cookie dough. You don’t have to wait for them to bake, and they taste just as good as, if not better than, the finished product. With fears of dividend tax increases behind us, let’s look at five powerhouse dividend stocks to see if they have what it takes to deliver cookie-dough dividends for years to come.

Who’s cooking?
Utilities are inherently dividend-oriented companies. They’re highly regulated and have stable cash flow, and their growth prospects are pretty much limited to population growth. Dividends make sense as the primary medium through which to deliver value to shareholders, and these companies are known to dole them out in massive servings. Here are five utilities serving up sizable portions: 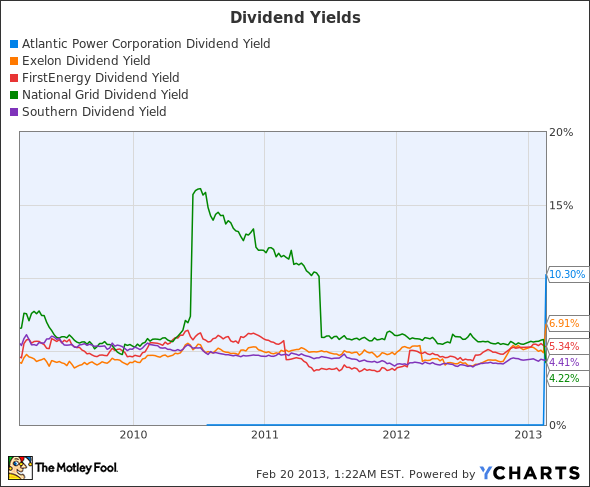 AT Dividend Yield data by YCharts.

Atlantic Power Corp (NYSE:AT) takes the cake at 10.3% and has a unique dividend structure that would make most investors salivate. Ignore the 0% on the chart and know that the utility pays C$0.958 every month. The yield fluctuates based on the stock price, but Atlantic has historically had one of the highest yields in town. National Grid plc (ADR) (NYSE:NGG)‘s yield brings up the rear, but it’s still above average for its sector.

To look past fluctuations in the stock price, absolute dividends tell us whether a company has historically increased the dollar amount that it distributes via dividends:

National Grid’s dividend has bumped up and down quite a bit over the past three years, while Atlantic and Southern have managed steady increases over time. Exelon and FirstEnergy have the same dividends today that they had in 2009, but both utilities took a temporary dip in 2011 and 2012, respectively. Looking ahead, Exelon recently announced that it will slash its dividend by 40% starting in Q2 2013.

Will the cookie crumble?
Dividends can make or break an investment decision, but not all dividends are created equal. I’ll examine two different metrics, one to see whether a company is focusing funds elsewhere, and one to examine the sustainability of the dividend itself.

First up: the capital expenditures-to-sales ratio. This simple statistic reveals how much a company is spending on itself. For a growing or renovating utility, this ratio will be high. For steadier companies, we can expect a lower number.