Are Apple Inc. (AAPL) and Others ‘Government Stooges’?

I’m sure everyone is aware of the blockbuster scandal that developed when whistle blower Edward Snowden released information regarding phone calls, emails, and text messages being monitored and recorded by the government. Initially, the media blamed the government, but shortly thereafter, the companies themselves became the primary target.

The war of transparency

I wrote a piece several days ago explaining that these companies’ biggest fear should be their reputation. At the time, they had given very brief statements, but a war has erupted as to which company has been/is the most transparent. Several companies have issued statements releasing numbers, approved by the feds, which show approximately how many of its users actually had their privacy surrendered.

Before moving on, I must ask a simple question. “When did the government become so large that companies have to seek their permission to inform its clients of privacy breaches?” Also, why did the government “allow” these companies to only release aggregate numbers of total U.S. data requests?

Here is my point. If companies want to be transparent, shouldn’t they be allowed to be? Microsoft Corporation (NASDAQ:MSFT)’s deputy general counsel, John Frank, said this: “This only impacts a tiny fraction of Microsoft’s global customer base. Transparency alone may not be enough to restore public confidence, but it’s a great place to start.”

A quick glance at the figures below show these aggregate numbers of data requests from the government to these companies.

My answer hasn’t changed, and is really quite simple. Reputation. I don’t think these companies have willingly thrown client information into the hands of anyone illegally. They have done what they can to provide safe keeping of their users’ records, but the outcome wasn’t what they hoped for.

They saying is still true, “It takes years to build a reputation and only seconds to destroy it.” You better believe these companies are doing everything they can to protect what they have spent decades building.

How have these companies performed since the news of this scandal? It’s been less than two weeks, but have their stocks really been affected? The graph below shows how each of these companies have performed. 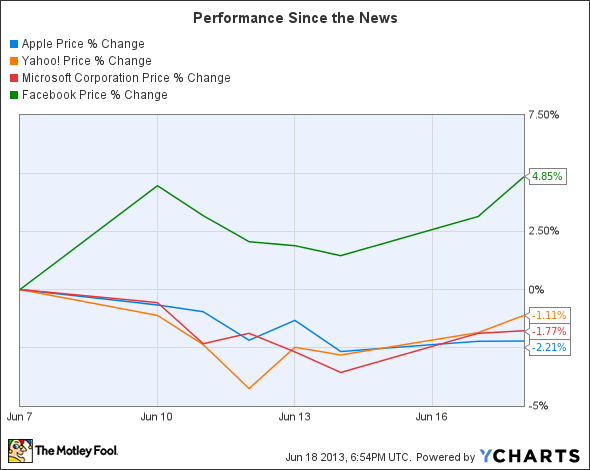 Most of these companies are long tenured companies with good track records. However, this is not the case for Facebook Inc (NASDAQ:FB). They are young, experienced one of the worst IPO’s in recent memory, and have faced privacy issues for quite some time. There is good news for Facebook, despite its dismal valuation metrics. From 2010, the company has seen revenues increase 258% and capital expenditures soar 422%. Add that to their increased activity in the mobile world, and the company appears to be headed in the right direction.