Ardelyx Inc (ARDX): Are Hedge Funds Right About This Stock?

Is Ardelyx Inc (NASDAQ:ARDX) a good investment right now? We check hedge fund and billionaire investor sentiment before delving into hours of research. Hedge funds spend millions of dollars on Ivy League graduates, expert networks, and get tips from industry insiders. They sometimes fail miserably but historically their consensus stock picks outperformed the market after adjusting for known risk factors.

Ardelyx Inc (NASDAQ:ARDX) investors should be aware of a decrease in hedge fund interest lately. Our calculations also showed that ardx isn’t among the 30 most popular stocks among hedge funds.

At the end of the third quarter, a total of 18 of the hedge funds tracked by Insider Monkey were bullish on this stock, a change of -5% from one quarter earlier. The graph below displays the number of hedge funds with bullish position in ARDX over the last 13 quarters. With hedge funds’ positions undergoing their usual ebb and flow, there exists an “upper tier” of key hedge fund managers who were adding to their stakes considerably (or already accumulated large positions). 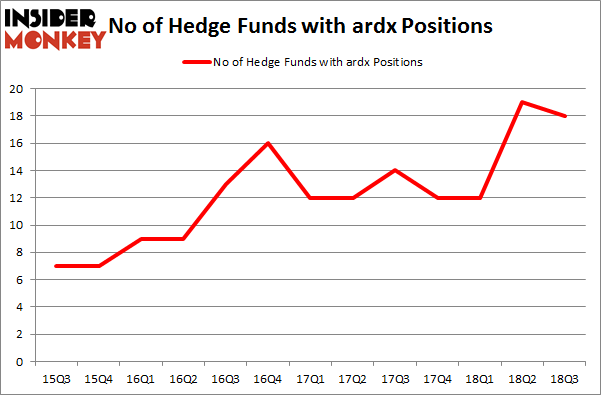 Judging by the fact that Ardelyx Inc (NASDAQ:ARDX) has witnessed declining sentiment from the aggregate hedge fund industry, we can see that there were a few hedgies that elected to cut their full holdings in the third quarter. At the top of the heap, Anand Parekh’s Alyeska Investment Group said goodbye to the biggest stake of the 700 funds tracked by Insider Monkey, worth an estimated $0.5 million in stock, and Efrem Kamen’s Pura Vida Investments was right behind this move, as the fund dropped about $0.4 million worth. These transactions are intriguing to say the least, as aggregate hedge fund interest dropped by 1 funds in the third quarter.

As you can see these stocks had an average of 6 hedge funds with bullish positions and the average amount invested in these stocks was $29 million. That figure was $61 million in ARDX’s case. DSP Group, Inc. (NASDAQ:DSPG) is the most popular stock in this table. On the other hand IMV Inc. (NASDAQ:IMV) is the least popular one with only 1 bullish hedge fund positions. Compared to these stocks Ardelyx Inc (NASDAQ:ARDX) is more popular among hedge funds. Considering that hedge funds are fond of this stock in relation to its market cap peers, it may be a good idea to analyze it in detail and potentially include it in your portfolio.