While coal-to-gas switching — the practice in which power plants use natural gas to create electricity rather than coal — is expected to continue in the aggregate over the next several decades, you shouldn’t count coal out of the fight anytime soon. In fact, many coal stocks – including Arch Coal Inc (NYSE:ACI), Peabody Energy Corporation (NYSE:BTU), and Alpha Natural Resources, Inc. (NYSE:ANR) look poised for a significant recovery on a near-term reversal in the coal-to-gas transition. Ultimately, while natural gas has shown strength recently and the explosion in shale gas production has increased the importance of gas, the U.S. is not likely to move away from coal as a critical source of power.

Shifting trends
Driven largely by the explosion in the supply of natural gas that resulted from expanding hydraulic fracturing, or fracking, natural gas gained significant market share over coal for the majority of 2012. Lower gas prices meant that it was cheaper to burn natural gas for power generation; when coupled with the fact that gas burns more cleanly than coal, the shift makes sense. As gas prices have begun to rise, however, there has been some reversal of this trend.

According to the Energy Information Administration, coal was responsible for 42% of power generation in 2011, but this contribution will fall to 35% by 2040. In addition to the proliferation of supply, one of the reasons for this shift is the one-way nature of many U.S. pollution laws. In many cases, coal-burning plants aren’t clean enough to be built new, meaning that existing plants may be updated, but it’s unlikely that new ones will come online. Furthermore, as some plants shifted to natural gas when prices fell, they won’t be permitted to switch back. Despite these impediments, as natural gas prices have risen, there is still an incentive — particularly on a global basis — to switch back to coal.

Competing forces
One of the interesting phenomena to be aware of is that the forces that drive prices between natural gas and coal both feed on each other and compete. When gas prices are low and there is pressure to switch, this drives demand for gas and hurts demand for coal. As demand for gas increases, it has the potential to raise prices, which would in turn lower demand. As demand for both natural gas and coal competes, particularly for power generation, and finds some equilibrium, prices may stabilize.

What this ultimately means to you is that the prices of both gas and coal are largely being driven by the supply of gas and its price. Despite the high supply of gas, prices have risen, which will decrease demand to some extent. This increase can translate into the stock prices of the major supply companies — those mentioned in coal, and Chesapeake Energy Corporation (NYSE:CHK) in natural gas.

Over the past three months (see the following chart), Chesapeake Energy Corporation (NYSE:CHK) has been rising solidly with the broader market and the price of gas. Conversely, the prices of coal companies have been weak but look poised for a reversal. Furthermore, with Peabody Energy Corporation (NYSE:BTU) offering a dividend yield of 2% and Arch Coal Inc (NYSE:ACI) a yield of 2.9%, there’s a strong income element that offers some protection. As such, these are two names worth considering for your energy portfolio at current levels. 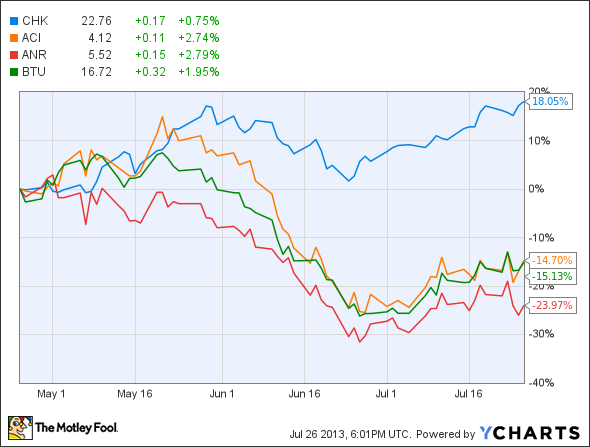 The article Is U.S. Energy Independence Still a Dirty Story? originally appeared on Fool.com and is written by Doug Ehrman.

Fool contributor Doug Ehrman has no position in any stocks mentioned. The Motley Fool has options on Chesapeake Energy.