Apple Inc. (NASDAQ:AAPL) is up over 3% on the last day of 2012, and opinions are mixed on what the stock will bring in 2013. Uncertainty over future product offerings and worries of increasing competition from Google are a couple of the most widely held beliefs of the bears. On the bright side, though, there are plenty of reasons to be excited about Apple’s prospects, and it all starts with the valuation. 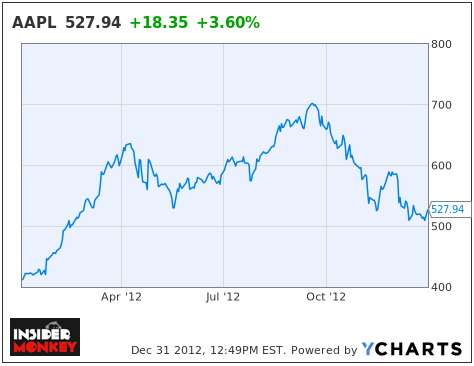 On CNBC earlier today, Channing Smith, co-portfolio manager of the Capital Advisors Growth Fund, was discussing his Apple Inc. (NASDAQ:AAPL) sentiment, which is particularly bullish. According the the broadcast, Apple is the second largest holding in Smith’s fund, worth close to 5% of his total portfolio. Smith mentioned that he “cut it back a couple months ago, but […] recently added to the position,” adding that:

“If you look at Apple’s stock earlier in the fall, we think investors might have gotten a little overly optimistic on the prospects for the holiday quarter. Today you have the opposite situation where investors are overly pessimistic. We’re on the cusp of an enormous product upgrade cycle, and we think Apple’s earnings are going to be dynamite in the fourth quarter [fiscal first quarter].”

But that’s not all the PM had to say about Apple Inc. (NASDAQ:AAPL).