The debate about whether Apple Inc. (NASDAQ:AAPL) is still a great investment has reached a fever pitch in the past six months. There are plausible arguments for both bulls and bears. Simply pointing to Apple’s P/E of 10 and its tremendous cash stockpile cannot win the debate for bulls. On the other hand, bears overlook the option value of Apple. What I mean by “option value” is the value of growth possibilities from new product lines that may or may not come to fruition.

Apple bears claim that the company has stopped innovating since Steve Jobs passed away. However, given Apple’s legendary secrecy, there is no way they can know this is true. If — contrary to the bears’ expectations — Apple manages to create another innovative and desirable product line, the stock could quickly return to its former glory. Thus, even if bears are right that the value of Apple’s cash stockpile and existing product lines (principally iPhone, iPad, Mac, and iPod) are fully reflected in its stock price, Apple Inc. (NASDAQ:AAPL) investors also “own” the company’s extensive research and development. Any money Apple earns on new product lines (or even innovative renovations of its existing product lines) is pure upside for Apple investors today. This potentially enormous “option value” may be the best reason for continuing to invest in Apple.

Frustration of the bulls
As my Foolish colleague Evan Niu pointed out last week, Apple bulls have been surprised repeatedly, as the stock has fallen by 40% since its September peak. 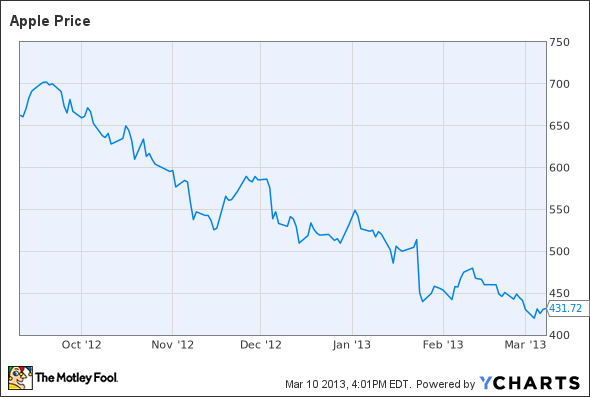 However, the bull argument that Apple Inc. (NASDAQ:AAPL) is insanely cheap overlooks the fact that there is a fine line dividing great value stocks from value traps. While Apple’s revenue is still growing, its gross margin is shrinking. The result is that the company is virtually certain to report a year-over-year decline in earnings this quarter. The average analyst estimate for Q2 EPS of $10.22 is 17% below Q2 FY12 EPS of $12.30.

Since Apple’s earnings are shrinking, it would be wrong to dismiss the bear case out of hand. The company does have at least one of the markings of a value trap. That said, Apple faces a particularly tough comparable figure this quarter, because the company posted a stratospheric gross margin of 47.4% in the year-ago quarter. Assuming revenue continues to grow, and gross margin remains within the typical historical range of 38%-41%, easier comparable figures in the second half of the fiscal year should allow Apple to meet or beat last year’s EPS. With Apple trading for less than seven times earnings, excluding cash, even flat EPS can justify the current share price.

Not dead yet!
The argument that innovation is dead at Apple has become a favorite of bears recently. Bears typically point to the iPhone 5 and the iPad Mini as “proof” that Apple has stopped innovating, because screen size is the main differentiating point compared to previous models. However, while Apple has not revealed any radical new features for its phones or tablets in the past year, bears cannot really know if Apple has stopped innovating. The most that bears can fairly say is that Apple has not publicly demonstrated any innovation recently.

While smartphone and tablet product cycles have become very short, the development cycle for new products can be quite long. Thus, Apple could be busy “innovating” in its development labs even if innovations have not come to market recently. The iPod was introduced in late 2001, and it took more than five years for Apple to reveal its next new product line: the iPhone. It was well worth the wait! The iPad came out three years after the iPhone release. It has now been three years since the iPad came to market, which means that we are just entering the window of time when — based on historical precedent — Apple might be ready to reveal a new (and potentially innovative) product category.

iTV? iWatch?
The global Apple obsession is strong enough that even if evidence is meager, there are still plenty of rumors about what Apple might be working on. Ever since Walter Isaacson published his biography of Steve Jobs, rumors of an “iTV” product have been rampant. Apparently, before his death, Jobs told Isaacson that he had finally “cracked” the problem of creating a TV that was simple to use. Recently, iTV rumors have been overtaken by reports that Apple is working on a “smart watch” that would sync with other Apple devices.

Both of these rumors are supported to some extent by various patent filings. However, the U.S. patent system provides a strong incentive to file patents even if you aren’t sure that you are going to use them. We cannot know whether an iTV or an iWatch might be on the way. However, we do know that Apple Inc. (NASDAQ:AAPL) is spending a lot of money on R&D: $3.4 billion in FY12. By contrast, Apple spent just $1.3 billion on R&D in FY09, when it was developing the iPad, and well under $1 billion annually while it was developing the iPhone.

Free option value
Of course, it is possible that Apple’s R&D budget is being spent inefficiently today and will not lead to useful and profitable innovations. However, the possibility that Apple will invent new successful product lines is not reflected in the current share price. Apple’s low valuation only makes sense on the assumption that EPS has already peaked. As a result, Apple shareholders have a free “option” on new products. If they go bust, no harm done; the profit from Apple’s existing product lines can support a stock price of at least $430. On the other hand, if Apple introduces a popular, profitable product line, the option value could be enormous. If you believe there is any chance that Cupertino’s tradition of innovation is not done yet, Apple is a steal at its current stock price.

The article Apple’s Real Value Is Its Option Value originally appeared on Fool.com and is written by Adam Levine-Weinberg