It is no secret that Apple Inc. (NASDAQ:AAPL) has taken a dive since September 2012.  One of the issues affecting the stock has been declining gross margins, but that’s boring so let’s talk about something more interesting.  Many investors, myself included, are worried that Apple may have lost its mojo on releasing revolutionary products.  Before we get to the main topic of this article, how about a history lesson?

The iPod facilitated the digital music transition away from physical discs.  Those white earbuds became status symbols of cool.  That’s when things really took off for Apple Inc. (NASDAQ:AAPL).  Then the iPhone came.  Do you remember the first time you saw an iPhone?  A phone without physical buttons?  A PDA (remember those?) and a phone combined?  And it could play music?  SOLD!

The iPad came with a little less fanfare and a terrible name (I remember thinking about women’s health products when the name was revealed).  It was basically a big iPhone, but it was revolutionary in its own right and consumers ate it up. Apple Inc. (NASDAQ:AAPL) was riding high.  Then . . .

Apple hasn’t released anything truly revolutionary (the iPad) since April 2010.  That is almost three years ago.  They released the iPad Mini late last year.  As a consumer, I love it.  As an investor I worry it dilutes the brand and gives access to the ecosystem (read about that advantage here) for far too low of a price.  Since September 2012, the stock has lost 1/3 of its value. 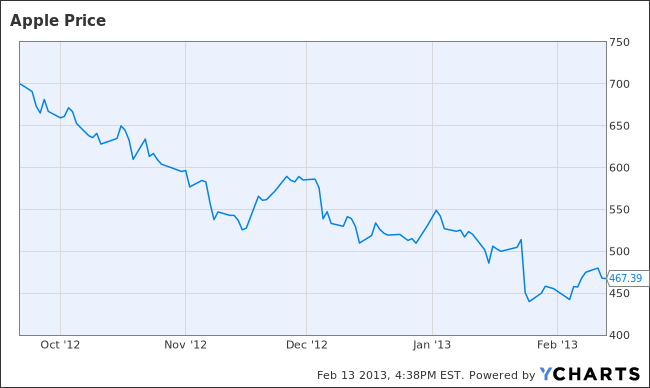 I was on the verge of selling all my shares in October of last year when some fellow Fools talked me off of a ledge in The Motley Fool discussion boards (click here for conversation).  I made the following point then:

Apple Inc. (NASDAQ:AAPL) doesn’t sell iPads, iPhones, and Macs. They sell cool. They’ve sold cool from the beginning. Is that still there? If so, how much longer? When they come out with the iPad 4 and the iPhone 6 and they are only marginal improvements over the previous versions, will it still be cool? When does that run out?

I held on to the shares and am still having the same questions.  I’m not pumped about the rumored TV.  What I am excited about is the latest rumor, an iWatch.  What is that?  Well, take a look at these pictures from Business Insider and tell me if this isn’t the most James Bondlike thing you’ve ever seen?  Here is a sampling:

The iWatch can bring the cool back to Apple Inc. (NASDAQ:AAPL), but, to me, it needs a few of things to make it a hit: