Apple Inc. (AAPL)’s Margin Worries Are Over (For Now)

After Apple Inc. (NASDAQ:AAPL) shocked the world on Tuesday by announcing that its iPhone 5C would retail for $549 unlocked — rather than the expected $300-$400 price point — its investors no longer have to worry about continued margin compression.

Revenue growth may remain anemic, but Apple Inc. (NASDAQ:AAPL) is now very likely to return to year-over-year margin growth next quarter. This should produce a return to solid EPS growth. 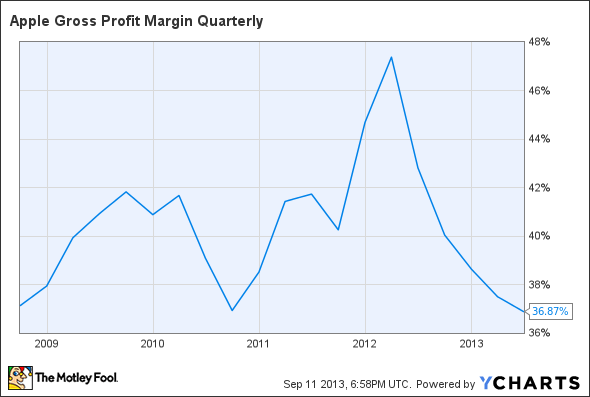 While Apple Inc. (NASDAQ:AAPL)’s gross margin rate has been unstable over time, it has generally oscillated around the 40% level since 2009. Gross margin spiked to 44.7% in Q1 of FY12 and peaked at 47.4% in the following quarter. However, over the following five quarters, gross margin plunged by more than 1000 basis points, hitting 36.9% last quarter. Apple’s guidance suggests that gross margin will be similar in the current quarter.

Back in January, I argued that this margin compression was a temporary phenomenon, not the beginning of a long-term trend. The release of the iPhone 4S in October 2011 had driven gross margin to an unsustainably high level, primarily because the 4S maintained the form factor of the iPhone 4, lowering production costs.

With the move to a new form factor (taller but thinner and lighter) with the iPhone 5, production costs rose. This was one of the main factors that caused gross margin to return to lower (and more normal) levels in the past year.

Enter the iPhone 5C
Back in my January article, I argued that gross margin was likely to stabilize in a range of approximately 38%-41% by the end of this year. Had Apple Inc. (NASDAQ:AAPL) introduced an iPhone priced at $299, or even $349, gross margin may have fallen out of that range. Instead, the 5C has an unsubsidized price of $549 in the U.S. It is even more expensive abroad, retailing for the equivalent of $733 in China.

The 5C is very similar to the iPhone 5, but it has a plastic exterior rather than the aluminum and glass casing Apple Inc. (NASDAQ:AAPL) has been using recently. This will presumably cut down on manufacturing costs. This will be better for gross margin than the alternative of simply dropping the iPhone 5 price by $100.

Moreover, the iPhone 5S — like the 4S — maintains its predecessor’s form factor. The main changes are upgraded processors and a new fingerprint sensor on the home button.

The iPhone 5S maintains the form factor of its predecessor, the iPhone 5. Source: Apple.