Apple Inc. (AAPL): Why I Finally Added The Stock to My Portfolio 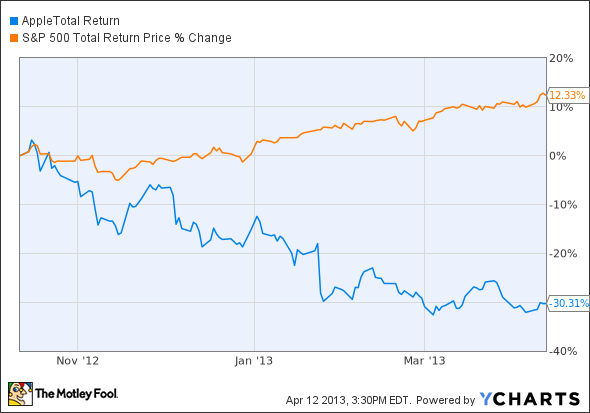 Ouch! That’s nearly 43% of frustrating underperformance turned in by a company, which, curiously enough, managed to earn nearly $42 billion (yep, with a “b”) on almost $165 billion in revenue during 2012 alone.

Why buy now?
So why, oh why, did I buy shares of Apple Inc. (NASDAQ:AAPL) in my personal portfolio for the first time last week? After all, truly Foolish investors know you should never buy a stock simply because it fell, especially since much of the time those stocks have been punished for a reason.

Even so, we should also recognize short-term fluctuations are wildly unpredictable. So let’s zoom out a little, shall we?

Take a look at what Apple Inc. (NASDAQ:AAPL) has done over the past five years relative to the S&P 500: 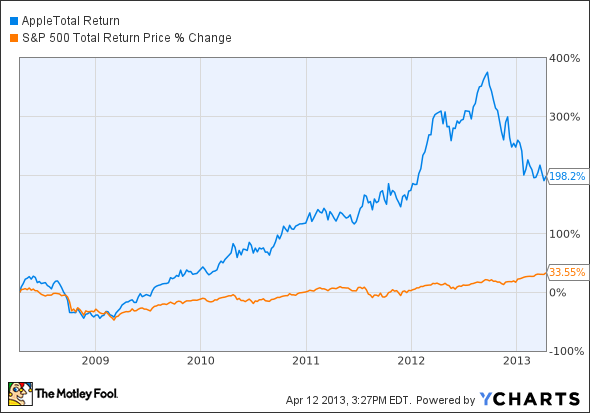 Sure, the index didn’t do half bad by gaining nearly 34% over the last half decade, but the fact remains that Apple Inc. (NASDAQ:AAPL) has absolutely crushed it over the longer term by nearly tripling investors’ money over the same period.

Even still, Apple Inc. (NASDAQ:AAPL)’s share price to date doesn’t mesh with its ever-increasing levels of profitability. For example, check out how quickly the company has grown its revenue, book value, and diluted earnings per share since then: 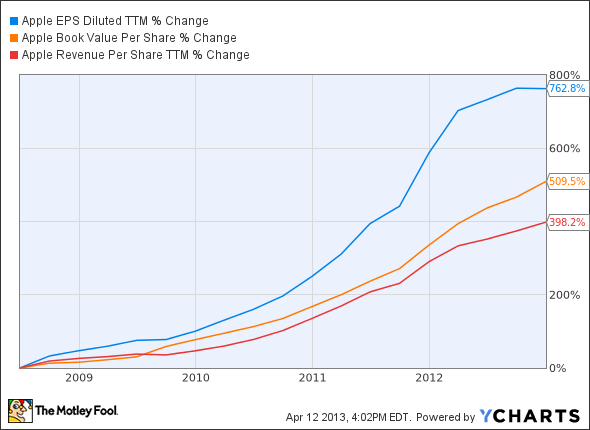 So what’s the problem? For one, investors certainly didn’t take too kindly to Apple Inc. (NASDAQ:AAPL)’s earnings per share leveling off toward the end of the above chart, and that largely resulted in the aforementioned mass exodus from the stock of a company that could formerly do no wrong. This should have come as little surprise, though, when we consider the mathematical impossibility of any company indefinitely keeping up that breakneck pace of growth.

However, thanks to the market’s manic nature, I’m convinced the sell-off in Apple stock over the past several months has been ridiculously overblown. As it stands, shares of Apple currently trade for a mouth-watering 9.7 times trailing earnings and just 8.7 times forward estimates. In addition, the company boasted an incredible $137 billion in cash and investments on its balance sheet with no debt at the end of the most recent quarter. If that weren’t enough, Apple shareholders can also look forward to collecting a 2.5% dividend, which amounts to a payout ratio of just 12%.

Moving forward
With this in mind, who’s to say Apple will be able to maintain its incredible levels profitability from here on out? And what’s to stop Android-based competitors from the likes of Samsung and Google Inc (NASDAQ:GOOG) from eating Apple’s lunch over the long term? For instance, as I pointed out in February, Android-powered smartphone shipments from Samsung have easily outpaced Apple in the global market recently, and Apple has experienced its fair share of challenges getting its higher-priced devices to gain traction in key emerging markets like China.

Even so, it’s easy to forget despite selling fewer phones than Samsung, Apple still managed to nab more than 70% of all smartphone profits last year.

In China, as fellow Fool Chris Neiger pointed out recently, Apple has plenty of room to correct its course in the region when we note its devices aren’t even available on China’s largest mobile network in China Mobile Ltd. (ADR) (NYSE:CHL). Not yet, anyway.