Apple Inc. (AAPL): What Should It Do?

“What will Apple Inc. (NASDAQ:AAPL) do with its massive cash hoard?”

This is probably the most reported-upon single aspect of any public company in history.  Millions of words have been written and spoken about this topic: And while they have ranged into the outlandish, like Apple buying Intel Corporation (NASDAQ:INTC), or one of the other several hundred S&P 500 components that the company has enough cash to buy, typically the two key arguments are that Apple Inc. (NASDAQ:AAPL) should either buy back shares, increase the dividend, or a bit of both.

“As part of this program, the Board has increased its share repurchase authorization to $60 billion from the $10 billion level announced last year. This is the largest single share repurchase authorization in history and is expected to be executed by the end of calendar 2015. Apple also expects to utilize about $1 billion annually to net-share-settle vesting restricted stock units.”

Additionally, the company announced a 15% increase in the dividend, pushing the yield near 3% at recent prices.  The company expects that the combination of these two initiatives will cost around $100 billion.

Which means that there’s still $135+ billion laying around.

So what should Apple do?

Absolutely nothing yet.  The cash hoard itself was never the problem; even activist investor David Einhorn would likely agree with that statement.  The real concern was that it was continuing to grow unabated, and that would have been both a mistake, and a disservice to shareholders to not deal with it.

There will be plenty of opportunity for Apple Inc. (NASDAQ:AAPL) to use this capital down the road, either to grow the business overseas where the cash resides, or eventually return it to shareholders, especially if the U.S. Government decides to issue a tax repatriation holiday at some point.

So how does this help investors?

In a few ways.  First off, the share repurchase program could reduce the shares outstanding by as much as 15%, depending on what the stock price does over the next few years.  In return, each shareholder’s stake in the business will increase by the percentage of shares retired.

Additionally, the cost of capital return programs like dividends, is decreased by the percentage of shares retired.  Think about it this way:  If Apple Inc. (NASDAQ:AAPL) can acquire 120 million shares with the $60 billion (an average of $500 per share) this would reduce the cost of the current dividend program by more than $4 billion dollars per year. For long-term shareholders, this creates an incredibly sustainable situation for dividend growth.

All that cash, and it’s coming back to investors

This chart shows how significant Apple’s cash-machine is: 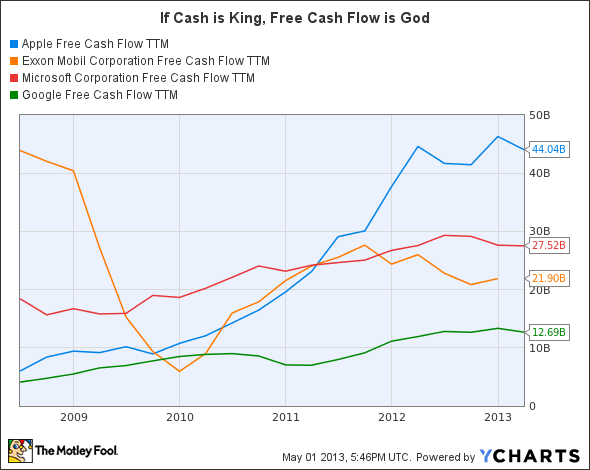 I’ve chosen the companies above for several reasons:  First off, Exxon Mobil Corporation (NYSE:XOM)Mobil is one of the great cash-machines on all time, and also has a strong record of returning said cash to shareholders.  Add in growing global demand for energy, and what is universally considered the best management team in the business it should continue to do what it’s done for decades:  Reward shareholders nicely.  Lastly, while I don’t recommend trying to “time the market,” the decline in oil prices could send share prices lower in the near term as it will drive revenues down.  But the key metric is profitable cash generation, and as the chart above shows, Exxon Mobil Corporation (NYSE:XOM) generates a lot of it.