Apple Inc. (AAPL): The Stock’s Next Run Could Come Sooner Than You Think

Apple Inc. (NASDAQ:AAPL) shareholders have understandably become very frustrated over the past seven months, as Apple stock has fallen nearly 40% from the all-time high it reached last September. Apple seems very cheap, at just 10 times earnings — or 6.5 times earnings if you exclude the company’s massive cash position — but that hasn’t managed to attract buyers. However, the negativity that has surrounded Apple recently may actually be setting the stage for another big run-up, which could reward the Apple shareholders who have been patient in the face of the stock’s downward spiral.

Low expectations
The market’s low expectations for revenue and earnings growth are one major reason for optimism about Apple Inc. (NASDAQ:AAPL) stock going forward. Wall Street already expects tepid revenue growth and a sharp year-over-year EPS decline when Apple reports Q2 earnings later this month. While iPad unit sales will be boosted by the first full quarter of iPad Mini shipments, iPhone and Mac sales are expected to be fairly similar to last year’s Q2 totals. Moreover, a combination of higher component costs and lower average selling prices will lead to a significant drop in gross margin; Apple Inc. (NASDAQ:AAPL)’s guidance in January implied that gross margin could fall as much as 990 basis points from the all-time high of 47.4% set in Q2 last year.

Apple’s poor recent stock performance can be attributed in part to the company’s long string of successes in the five years after the iPhone’s launch in mid-2007. That raised the bar so high that the company was bound to disappoint eventually. When it finally happened, Wall Street quickly soured on Apple stock, as seen in the rapid fall of price targets from analysts such as Peter Misek, whose $900 price target of early December became a $420 price target by early March. With many market participants expecting Apple Inc. (NASDAQ:AAPL) to struggle for a long period of time, any evidence of a return to growth could quickly reinflate Apple stock.

Big opportunities
Yet behind Wall Street’s current scorn for Apple and low expectations regarding the potential for innovation there, Apple has a variety of potential catalysts on the horizon. First, new product lines could be released as early as this fall, with an “iTV” the most likely candidate. Rumors of an iTV have been rampant ever since the release of Walter Isaacson’s biography of Steve Jobs, since Jobs told Isaacson that he had “finally cracked” the TV. However, Apple Inc. (NASDAQ:AAPL) followers have been disappointed as purported iTV release dates have come and gone. Today, the market seems to be assigning no value to new product lines, based on the low Apple stock price. I don’t know what Apple’s next product will be or when it will be released, but I’m very confident that there will be one; Apple’s R&D spending grew 40% in the last fiscal year, to $3.4 billion.

Furthermore, Apple will almost certainly release new versions of the iPhone and full-size iPad within the next three to six months. These will restore profit growth — and hopefully boost Apple’s stock — for different reasons. The next iPhone, widely assumed to be called the iPhone 5S, is expected to be very similar to the iPhone 5, except for the possible addition of a fingerprint reader. The radical changes to the iPhone manufacturing process for the iPhone 5 caused a significant decline in Apple’s gross margin. With fewer changes this time around, Apple’s gross margin should return to the historically typical range of 41%-43%. 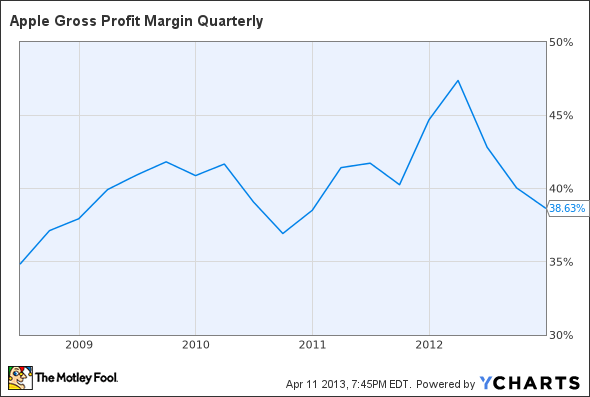 A return to higher gross margins later this year will probably drive 15%-20% profit growth for Apple, even with sluggish revenue growth.