Apple Inc. (AAPL): The Company Should Get Ron Johnson Back. Now.

Way back in June 2011 when Apple Inc. (NASDAQ:AAPL) lost retail chief Ron Johnson to J.C. Penney Company, Inc. (NYSE:JCP), it was seen as a huge loss for Apple and a big win for J.C. Penney. Johnson accepted the promotion, becoming CEO of the struggling department store chain. Nearly two years later, it would seem that Johnson wasn’t such a victory for J.C. Penney after all. 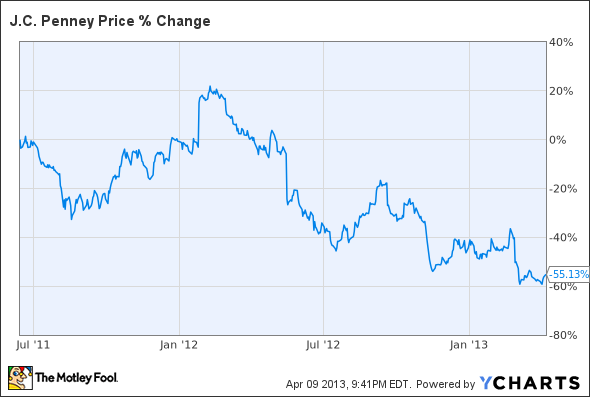 Shares lost 55% of their value under his tenure (not including the 12% drop the following day after Johnson’s predecessor, Mike Ullman, was rehired). J.C. Penney is an entirely different breed of retailer compared to the Mac maker. Johnson’s strategy of removing discounts, coupons, and sales in favor of more transparent pricing didn’t resonate with consumers, and J.C. Penney’s sales suffered for it.

Well, as luck would have it, Johnson’s former position at Apple is still up for grabs, following John Browett’s departure in October. Since then, Apple has been searching for a new retail chief, with retail operations falling under CEO Tim Cook’s jurisdiction in the interim. Browett came from the U.K.’s Dixons chain, and the British exec later said that he simply “just didn’t fit” at Apple, maintaining that he wasn’t rejected for a lack of competency. Browett failed to see the big picture, trying to save costs without realizing that cost cutting is the last thing that Apple Inc. (NASDAQ:AAPL) should do, especially if the customer experience is the thing getting shortchanged.

Apple Retail has been doing just fine
Since Johnson’s departure, it’s not as if Apple’s retail operations have struggled. Far from it — Apple retail has grown and has now generated $19.2 billion in trailing-12-month sales.

The company has also expanded its total store count by 74 stores to 401, up from 327 when he left. Most of this expansion has been internationally, as Apple’s domestic retail footprint is rather mature and the company is rightly focusing abroad. Foot traffic is also up, with record 120 million visitors last quarter. Average quarterly revenue per store is also flirting with all-time highs at $16.3 million in the fourth quarter. Clearly, Apple Inc. (NASDAQ:AAPL) isn’t in dire need of Johnson to return. But at the same time, Apple Retail lacks dedicated leadership right now, and Johnson gets Apple. This is the guy that launched Apple Retail in the first place, promptly silencing critics that initially derided the move as misguided and doomed to fail. The Genius Bar is now the paragon of modern customer tech support, the type of notion that’s mostly lost in a department store environment.